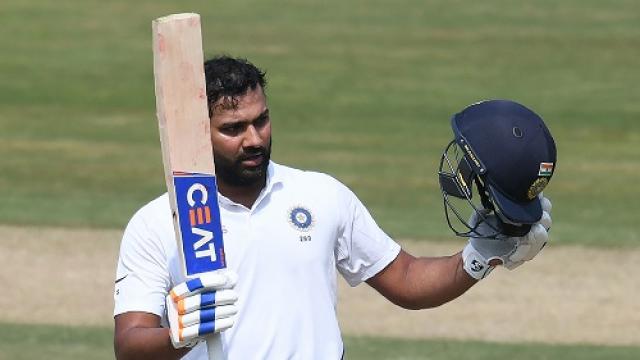 Rohit Sharma, the newly selected opener for India in Tests, had a fantastic first day at the office in the first Test against South Africa. The ODI opener went on to score a superb fifty on Day 1 of the Visakhapatnam Test. And with his 11th fifty in Test cricket, he equalled Indian legend Rahul Dravid’s record for the most number of consecutive fifty-plus scores in Tests at home.

While Dravid had hit 6 successive fifty-plus scores between 1997 and 1998, Rohit Sharma has scored 6 successive hundreds at home between 2016 and 2019. The Mumbai Indians captain was selected ahead of KL Rahul for the no.1 spot as his usual middle-order position was already booked by Hanuma Vihari who had a wonderful outing in West Indies earlier this year.

Last week in the practice match between Board President’s XI and South Africa at Vizianagaram, Sharma couldn’t open his account and was dismissed for a duck, raising some questions among the critics. However, all of them were silenced today through his sublime century against the likes of the Protea seamers Kagiso Rabada and Vernon Philander.

He waited patiently during the crucial first hour and started firing all guns out once South Africa introduced spinners. Him and Mayank Agarwal raced to fifty within the first session and built a solid 100 plus partnership for the opening wicket.

Even though rain stopped the first days play unexpectedly, India are in firm control with 202 on the scoreboard. Rohit Sharma is batting on 115 and his partner Agarwal is unbeaten at 84.