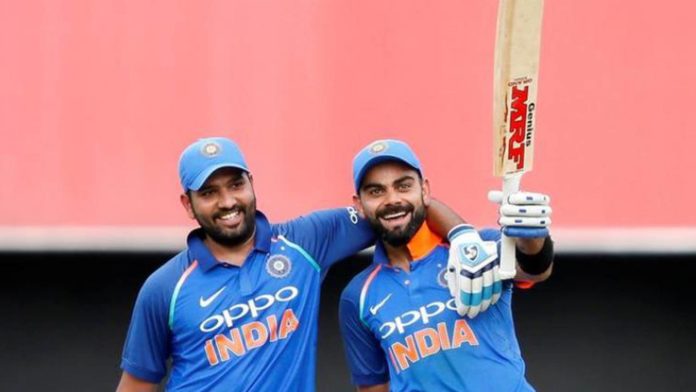 Captaincy is one factor in cricket that always attracts controversies and debates. It is a cumbersome task as the captain to bind a bunch of talented individuals together and make them play good cricket!

In India, there’s a myth of assigning the captaincy role to the best player of the side. Ahead of the new IPL season, there are many leaders vying for the coveted prize, including iconic Indian cricketers Rohit Sharma, MS Dhoni and Virat Kohli.

For long, it remained a murmur, but not anymore. There’s a widespread discourse in the media whether India should opt for split captaincy and should Rohit Sharma too get a chance to be a full-time captain. After the 2019 World Cup elimination at the semi-final stage, there were many tongues wagging, asking for Virat Kohli’s head.

So is Rohit Sharma well-placed to offer a viable alternative to Kohli as India’s limited-overs captain?

Thirty-three-year-old Rohit has always impressed as the man in charge of Mumbai Indians, who will defend their IPL crown in UAE.

Rohit’s style of captaincy has a lot of admirers within the current Indian setup. Apart from his exploits in the IPL with Mumbai Indians, Rohit has led the Indian team to Asia Cup title and the Nidahas Trophy laurels. The way he marshalled his troupe in Virat Kohli’s absence earned him a lot of praise. Rohit was first handed over the mantle when Sri Lanka visited India in 2017 when Kohli was on a break to get married.

The prime reason for their debacle is leadership. Virat is undoubtedly a great batsman but he fails to get the best out of his teammates. On the other hand, Rohit Sharma leads a team having average players but he uses them efficiently and knows the strength of each player. That’s why Mumbai Indians have won the title four times.

The winning percentage of Royal Challengers Bengaluru is just 48.17 despite having players like Chris Gayle, Mitchell Starc, AB de Villiers and Virat Kohli in their ranks. On the other hand, Mumbai Indians have a much-better winning percentage of 57.01 which is the second-highest winning percentage after Chennai Super Kings. This gulf of difference vividly depicts the capability of both the skippers. Rohit boosted the confidence of every player and used them as per the requirements.

Royal Challengers Bengaluru, on the other hand, have not bagged the IPL title despite having the best players in the world.

There’s a striking similarity between Rohit Sharma and MS Dhoni’s style of leadership. No wonder, the duo are statistically the most successful captains in the Indian Premier League with 7 title between them (Rohit 4 and Dhoni 3). Just like Dhoni, Rohit is very calm and composed and goes about captaincy without much fuss.

Mumbai Indians have won the IPL title thrice under the captaincy of Rohit Sharma. On the other hand, Kohli has failed to win any big tournament as a leader with RCB. Royal Challengers Bengaluru were beaten twice in the final under his captaincy. Hence, it would not be entirely undue to say that Rohit has a much better record of winning trophies than his counterpart.

Kohli has also led India in 89 ODIs so far out of which the team has gone on to win 62 matches and lost only 24 games. One game has tied during Virat’s reign, and two ended in no result. Virat Kohli has a win percentage of 71.83 as India has emerged as one of the strongest ODI teams in world cricket.

Rohit Sharma has always proved that he can handle tough situations and his decisions in crucial stages have always turned the tables for his team. On the other hand, Kohli often appears to lack composure in crunch situations. It could be said that the current Indian captain needs someone like MS Dhoni as a mentor on the field at times and one needs to understand that the Ranchi born wicketkeeper-batsman may not be around forever as he enters the twilight of his career.

Rohit Sharma and Virat Kohli are two ends of the spectrum. While one is calm and collected, the other is volatile and aggressive. But they both are incredible cricketers in their own right. The verdict may be to close to call. After all, as they say-if it ain’t broke, don’t fix it!