After their historic victory against England at the home of cricket, Indian cricketers have got some much-needed break of nine days. During this break, the players are seen spending time with their loved ones. Rohit Sharma and Ritika Sajdeh are one couple who are seen exploring some new places and can be seen bonding over food.

Recently, Ritika took to Instagram and posted a selfie with Rohit Sharma, her brother Kunal Sajdeh and Shardul Thakur. Shardul and Rohit are good friends off-field. Both the players hail from Mumbai and they have played together for the same state in domestic cricket. Now it seems after marrying Rohit, Ritika too has developed a good friendship with Thakur. Ritika gave a fitting caption for the post: My 3 favorite boys.

Sachin Tendulkar praises Rohit Sharma for his batting in England 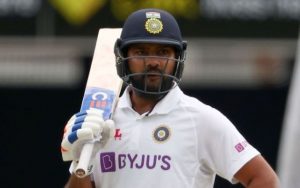 When Rohit began opening the batting in white-ball cricket in 2013, it rejuvenated his career. He developed immensely and became one of the greatest white ball players of all time. However, his test form was still a question mark. He could never cement his place in the side.

But since Rohit started opening in Test cricket in 2019, it revitalized his test career. He looked completely different. According to numbers, he has the best average for any opener in the last two years.

Rohit has also answered to his critics by performing in England, which is considered to be the toughest place to bat for an opener. Though he has not been able to convert his starts into a big score, he has made sure India doesn’t lose too many wickets early in the innings.

Sachin Tendulkar has been impressed by Sharma’s performances so far and feels his game has gone a notch higher.

“He has been a leader there and KL (Rahul) has supported him brilliantly. As far as playing pull shot is concerned (which got him out in the first innings at Lord’s), he has cleared the fence with that shot and I am looking at what he has been able to achieve for the team in both Tests. Rohit has left the ball and defended the ball brilliantly or equally well. He was always a fantastic player but seeing his last few innings in England, I can say he has definitely gone a notch higher,” Tendulkar said.

ALSO READ: Horses to watch ahead of The Yorkshire Ebor Festival 2021