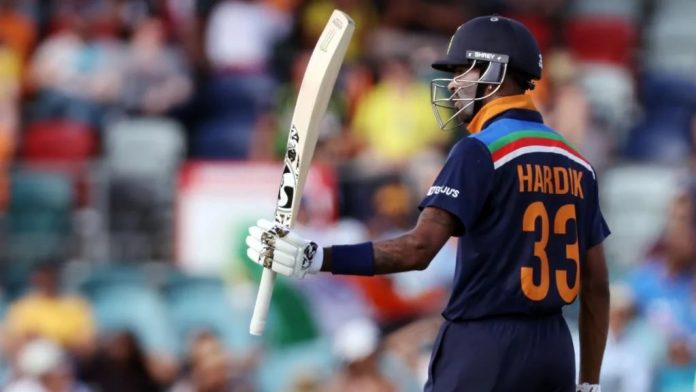 The Indian cricket team snapped its five-match losing streak, registering a 13-run win in the final ODI of the series against Australia to salvage some pride. However, the talking point of the day was the emergence of Hardik Pandya, the pure batsman.

Given the long-standing lower-back injury he has, Hardik Pandya has done little bowling since the Indian Premier League (IPL), where he played as a pure batsman for the eventual champions Mumbai Indians.

Pandya did bowl four overs in the second ODI but he has now confirmed that he won’t be bowling anytime soon. Hence, the management has to formulate long term plans for him. Given his sparkling form with the bat though, Pandya has fixed his spot as a specialist batsman and we could see another batsman being dropped in favour of the all-rounder.

Playing international cricket as a pure batsman for the first time in his career, Pandya responded well to the responsibility and scored 210 runs in the series at an average of 105.00. The right-handed batsman was eating up an all-rounder’s spot but given his performances with the bat, the team management had no issues in playing only five bowlers.

Hardik Pandya and his batting credentials were never in doubt but he hardly got opportunities to play these sort of knocks in ODIs. When an opportunity came, Pandya grabbed it with both the hands and he will keep his spot even when an all-rounder comes into the playing XI.

Pandya’s inclusion in the playing XI for the ODI series in Australia did raise several eyebrows considering the fact that the all-rounder is still not entirely fit to bowl. While apprehensions were raised regarding the 27-year-old playing as a genuine middle-order batsman, the cricketer successfully silenced his critics with notable performances in the series.

On Wednesday in Canberra, Hardik Pandya and Ravindra Jadeja bailed India out of a sticky situation to orchestrate a remarkable partnership of 150 to help India post a total of 302. This also is the highest sixth-wicket partnership for India against Australia. Pandya finished with unbeaten 92, whereas Jadeja added 66 crucial runs.

Known for hitting humongous sixes, the player showed a different dimension of his game as he relied on running between the wicket to keep the scoreboard ticking.

Assessing the situation in the middle Pandya consolidated during the initial parts of his innings, taking 55 balls to complete his half-century. But just as fans would expect, he pressed the accelerator towards to fag end of the innings, taking just 21 balls to score his next 42 runs.

The maturity with which he controlled the innings was music to ears to many Indian fans. The most exciting aspect of him enhancing his batting credentials for India though is the fact that he’ll be soon back to bowling regularly, which would elevate him to a status of a genuine World-Class all-rounder.

The most impressive aspect of Hardik Pandya’s batting display is the way he moulded his thinking process. Not only was he playing as a pure batsman, but thinking like one too! Evidently, he has added a sense of responsibility to his natural attacking instincts. He’s a T20 specialist who is accustomed to life in a fast-paced lane.

Normally donning the role of a rollicking finisher, Pandya took the mantle of a builder of an innings and excelled at it. His scores of 90, 28 and unbeaten 92 in the series go a long way than just filling up the statistics.

Over the years, Pandya always had the talent to battle it out but couldn’t put on a substantial score to save India’s shambles. In 2020, one of his most revered abilities, bowling, was taken away from him, which raised questions over his place ahead of Manish Pandey, who was viewed as the best possible option.

On the basis of his 210 runs in the three-match series, what Hardik Pandya has displayed is that deep inside him flashing his earrings and tattoos there’s a determination and grit to keep on evolving and make the most of his ability.

He walked back scoring 76-ball 92, weathered storms right from the first game, dropped his body when the short-ball came his way and absolutely hoicked the deliveries which were in his sight. A new age knock from a new-age cricketer but more importantly dressed in a tip and tidy form of a classical batsman of yesteryears, maybe to usher a new chapter in his international career!