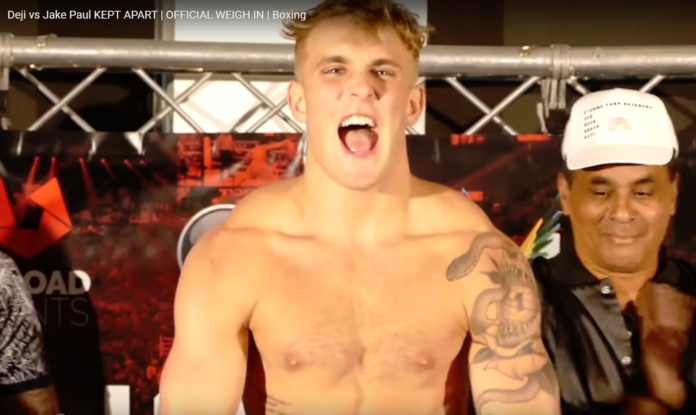 The biggest event on the internet took place last month between British Vlogger KSI and controversial American Youtube star Logan Paul at the Manchester Arena in London in a Boxing match.

The undercard also included Jake Paul who is the brother of Logan Paul and Deji, who is KSI’s younger sibling. It was truly a historic and biggest event ever made on the internet as they both have 37 million subscribers combined.

Jake Paul emerged victorious as he knocked out Deji and now it looks like Jake is biting more than he can chew, as he said that he wants to fight Floyd Mayweather.

In an article recently published by Hollywoodlife, a source close to Jake Paul told them in an interview that, “Jake would love to get in the ring with Floyd because he knows that it would turn out very lucrative for him”.

“Though many would think it was a joke – and Jake would easily get decimated quickly — he knows that there is a huge payday for anyone that gets in the ring with Floyd,” the insider tells HollywoodLife.com. It’s all about the money, it seems, and if there’s anyone who can talk as much trash as Floyd, it’s a Paul brother. “[Jake] would love to use his social media presence and the hype machine that Floyd provides to make a fight between the two happen.”

However, last month after beating Deji, he talked about fighting American Rapper Chris Brown and he said during the post-fight interview:

“I want to call someone out,” said Jake after his match. “Chris Brown, I know you were supposed to fight Soulja Boy. But I think it is time you got in the ring with someone your own size.”

‘I wanna keep on fighting, I love the sport. So, Chris Brown, I wanna see you,’ he added.

Although, I doubt Floyd Mayweather would even entertain Jake Paul considering he is chasing a nine-figure payday against Manny Pacquiao.

Boxing: Canelo Alvarez to potentially return to the ring on Dec.15