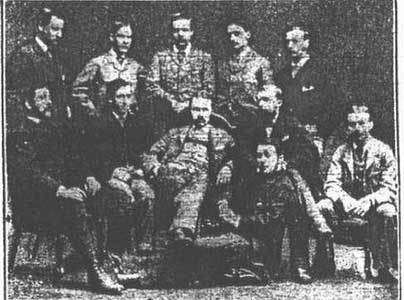 From deep within the archives, a true historic piece of football gem has been found in England. Petter Seddon, a freelance author in the Derby Local Studies Library found a photo in an old newspaper dedicated to football named Derbyshire Football Express. He soon realised that the photo was dating from March 4, 1876 and depicted an England team of 10 players and a referee before a match against Scotland.

The photo is from England’s 5th international game of football which was sent to a newspaper outlet by one of the players in the team in 1926.

“It was a huge slice of luck that I found the picture. At the time, I was trawling through articles in the local studies library, looking through pictures to do with Derby County and England star Steve Bloomer and just happened to stop at the picture of the 1876 team. It was a real needle-in-a-haystack job because there is so much on the archives that it would have been easy to miss.” – Peter Seddon