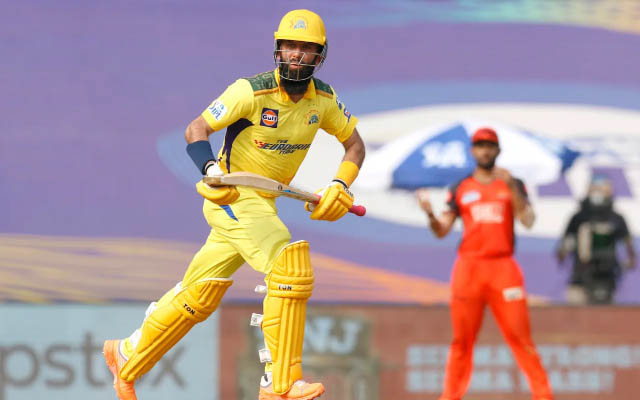 Chennai Super Kings (CSK) head coach Stephen Fleming believes Moeen Ali should return to full fitness in a week’s time. The all-rounder suffered an injury in a training session and has not been in the CSK playing XI for the last two matches.

The Ravindra Jadeja-led side are currently placed ninth in the table with only two wins under their belt. One of the areas that the side have struggled so far is the top-order.

With Ruturaj Gaikwad and Moeen Ali’s poor form, CSK have been unable to replicate their efforts from their title-winning campaign. They have tried to place Mitchell Santner as a makeshift top-order batter, but the move has not paid dividends so far.

“He rolled his ankle, X-rays revealed there was no fracture but there is always a recovery period maybe seven days. We are hopeful the recovery will be quick given that there is no fracture,”

Ali has not been among the runs in the five matches he has played so far this season. Apart from scoring 48 in the loss against SRH, the all-rounder has not given much of an impact with both bat and ball.

With Adam Milne and Deepak Chahar already ruled out of the tournament due to major injuries, CSK are mounting a major injury crisis. Their latest concern comes in the form of Ambati Rayudu, who hurt his fingers while fielding against Punjab Kings at the Wankhede Stadium.

Despite the injury, he was able to play a blinding 78-run knock which kept his side in the game.

Speaking about the injury that the middle-order batter suffered, the head coach said:

“The first check was around the break and his hand was bruising. It was just a case of icing that and getting that down and I think a little padding around the glove.

“It was the same hand that was broken sometime back, so it’s still pretty tender and a knock like that can obviously cause some damage,

CSK will next face the in-form Sunrisers Hyderabad (SRH) at the MCA Stadium in Pune.