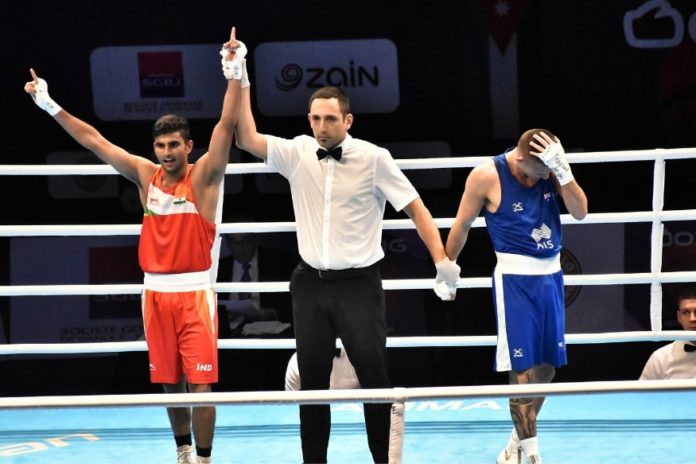 Pugilist Manish Kaushik (63kg) became the ninth Indian boxer to qualify for Tokyo Olympics after beating Harrison Garside of Australia 4-1 in a box-off bout at the Asian/Oceanian Olympic Qualifiers in Amman on Wednesday. This victory also ensured India their highest-ever haul of Olympic quotas in a single event, surpassing the previous record of eight which was at the 2012 London Olympics.

Following a setback in the quarter-finals, Kaushik was given another chance to secure his place in this summer’s Olympics and the army-man didn’t disappoint his country this time. In a brutal bout which was a repeat of the 2018 Commonwealth Games final, the 24-year-old suffered a nasty blow on his ribs; but went on to beat his opponent (who also endured a bloodied face) by a margin of 4-1 through some fantastic moves.

“It was my dream to play at the Olympics and today it has finally come true for me and my family. My coaches have made a huge contribution in this,” the Haryanvi boxer said after the match.

Meanwhile, Ajay Singh, the President of the Boxing Federation of India also expressed his delight with India’s performance saying,

“It is a moment of pride for Indian Boxing. For the first time ever, 9 Indian pugilists have qualified for the Olympics and that too at the first qualifying event. We still have the World Qualifiers in May and I am confident that India will qualify in all 13 categories,”

“Our mission is to win Olympic medals and these 9 qualifications are an indication of the potential that Indian boxers possess. Having qualified in the first qualification event will give them a big boost and will motivate them to work harder. On our part, we along with the Sports Ministry and SAI will ensure that we provide them with the best possible infrastructure and support to meet the end objective.” he added.

However, the Indian boxers who failed at the Asian Qualifiers including Sachin Kumar (81kg), will get one final opportunity to represent the country at the Tokyo Games, through the World Qualifiers in May.

Read why the Tokyo 2020 Olympic Games could be postponed to the end of the year!