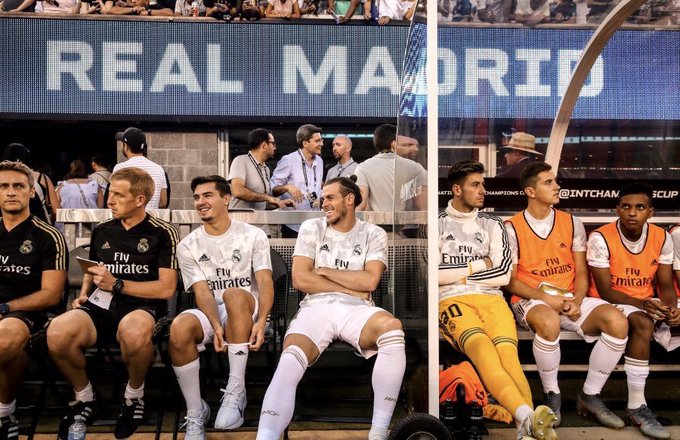 In the International Champions Cup preseason tournament, Real Madrid suffered a massive defeat against local rivals Atletico Madrid . The scoreline was a massive 3-7 and it was sheer humiliation for everyone involved with Real Madrid, except for one man – Gareth Bale.

Los Blancos were losing 6-1 when Bale came on. Atletico then scored again shortly afterwards to make it seven, before Zinedine Zidane’s side pulled two goals back to make the scoreline slightly more respectable before full-time.

Bale was often spotted by keen cameramen giggling and joking with others on the bench while Madrid were losing , smirked when he was asked to come on and even had a huge smile when Atletico took the lead by 7-1. Strange, but what else would Gareth Bale be expected to do after the disrespect and harsh treatment he has received from colleagues at Real.

As awkward as the situation seems for the Welshman under Zidane, it doesn’t look like it will resolve unless Bale switches clubs.

With a huge offer lined up for him by Jiangsu Suning, he could be set to light up the Chinese Super League.