The legendary footballer of Real Madrid, Roberto Carlos has high hopes for Vinicius Jr. According to him, the young Brazilian footballer has the potential within himself to take him to the next level in the upcoming days. Vinicius Jr is going to get more chances in the first team of Real Madrid under the management of Santiago Solari. 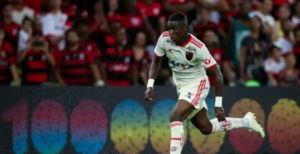 “I always hope that the Brazilian players that come to Europe are among the best,”

“Vinicius is very young and left Flamengo already with a lot of experience. It was great for him to play against Plzen. He will make history in Real Madrid and in world football. He is a modern player, able to dribble, responsible, consistent and complete.”

Roberto Carlos was really happy with the big win of Real Madrid against Viktoria Plzen in the Group Stage of Champions League. He added,

“It was a big win, it will give confidence in order to keep working and improving so that the team can reach another final, which would be a stadium here in the capital,”

However the legendary footballer Roberto Carlos stated that Juventus would be the clear favourites in this season’s Champions League as the presence of Cristiano Ronaldo made them stronger than ever.

“He is a great representative of modern football but the other day we saw how they lost against Manchester United.

“In modern football the winner is not always the one with the best but who has the most balanced squad. Cristiano means a lot but he cannot win the Champions League on his own.”