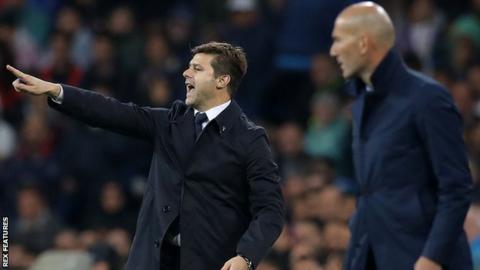 It is no secret that Real Madrid are in crisis, a deep one so as to say. The first step to climbing out of this hole is to get a new manager. Los Blancos did actually sack Lopetegui and replaced him by Santiago Solari but that has just happened to show that a world class name needs to be at helm at the Bernabeu and not just anyone.

Mauricio Pochettino is hot property in world football right now. He is known for grinding out results in big games and mount serious challenges for the titles and a few other miracles. Real Madrid not just want him, they need him.

In January 2009 , Espanyol were third from bottom and up came Pochettino who signed up for them as his first coaching role in men’s football. Talk about divine intervention as Espanyol stole a draw against neighbors Barcelona a day later and ended up comfortably mid-table. His high pressure and one on one defensive covering methods since then have made him a winning machine even at Spurs.

Tottenham’s players believe Pochettino will have a decision to make at the end of the season, with Danny Rose saying talk of an elite-level rival moving for him is simply a result of the job he has done at Spurs.

“It’s no coincidence that every day you read Real Madrid want him or United want him,” Rose added. “It’s exactly what he deserves. What he has done here in the last four or five years has been amazing. He has transformed how others think of us outside the club and he has transformed how we think of ourselves and how we approach big games.

“The belief he gives everybody is just amazing. For example, Kyle Walker-Peters made a mistake in Barcelona but it will not affect what the manager thinks of him. He will stick with Kyle no matter what. That’s the sort of man he is: once you win his trust it will take an awful lot to break that. He has been amazing for myself and this club, and we hope he is here for a very long time.”