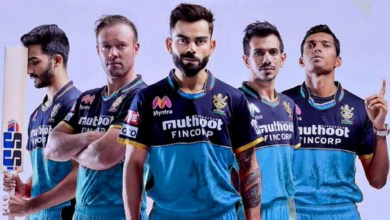 Royal challengers Bangalore (RCB) are known to play for a good cause. In the previous seasons, they have spotted a green jersey to spread awareness about the environment. In this season, the Virat Kohli-led side will be seen wearing a blue jersey in a bid to pay tribute to the Covid frontline workers. 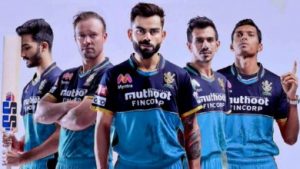 The franchise announced that they will be donning the blue jersey in their opening encounter in the IPL’s second leg in UAE. They will take on Kolkata Knight Riders on September 20.

The Twitter handle of RCB confirmed the news: “RCB to wear Blue Jersey v KKR on 20th We at RCB are honoured to sport the Blue kit, that resembles the colour of the PPE kits of the frontline warriors, to pay tribute to their invaluable service while leading the fight against the Covid pandemic.”

We at RCB are honoured to sport the Blue kit, that resembles the colour of the PPE kits of the frontline warriors, to pay tribute to their invaluable service while leading the fight against the Covid pandemic.#PlayBold #1Team1Fight pic.twitter.com/r0NPBdybAS

Royal Challengers Bangalore were supposed to wear the jersey in their 8th match in the league which was in India. However, the IPL got postponed due to Covid outbreak in various camps. 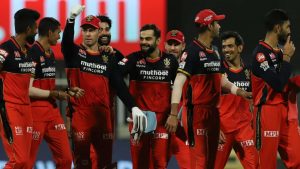 Royal Challengers Bangalore have been the most entertaining team in the IPL. They have had plenty of match-winners in their team. However, they always fall short of the title. This year they are comfortably placed at number 3 position. Hence, RCB will try to open their account this year.

Skipper Virat Kohli reached the shores of the UAE on Monday. Kohli has said that he is looking forward to this exciting T20 phase. “I am very excited to see them with the whole group at practice & very excited to resume a very good season that we started last time around,” he said in a video posted by RCB social media team on Monday.

ALSO READ: Sourav Ganguly wants the rescheduled Test to be the fifth Test and not a one-off fixture