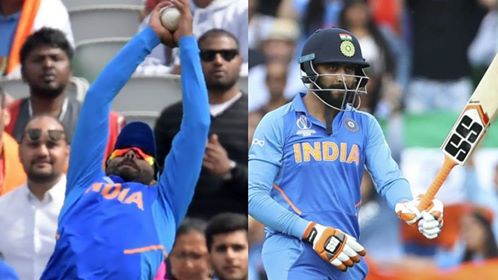 India crashed out of the World Cup in the semi-finals against New Zealand on Wednesday. This is India’s second consecutive semi-finals exit in World Cups. The batting got off to a horrible start while chasing a gettable target of 240. The first powerplay ended with India losing four wickets and making just 24 runs. However, one big plus from this game was the all-around performance of Ravindra Jadeja.

Brilliant with the ball, live-wire in the field and outstanding with the bat, he almost won it for the Men in Blue. Jadeja batted at a strike-rate well above 100 when the team was under serious pressure. He played the perfect role in helping Dhoni at the other end to build up his innings.

Sports has taught me to keep on rising after every fall & never to give up. Can’t thank enough each & every fan who has been my source of inspiration. Thank you for all your support. Keep inspiring & I will give my best till my last breath. Love you all pic.twitter.com/5kRGy6Tc0o

However, the Sir-Jadeja show had started in the first innings itself. A brilliant catch and a direct hit from the deep meant that it was Jadeja’s special day. While batting, it was 92 runs for the loss of 6 wickets when Jadeja entered the field. And he absolutely lit up the stadium with his 59 balls 77.

Jadeja took to Twitter to thank all his fans for their support. He also promised them to keep fighting until the very last breath.

Though New Zealand won the match at the end by 18 runs, this match would surely be remembered for Jadeja. With this performance, he has surely slammed all those who were doubting his abilities.