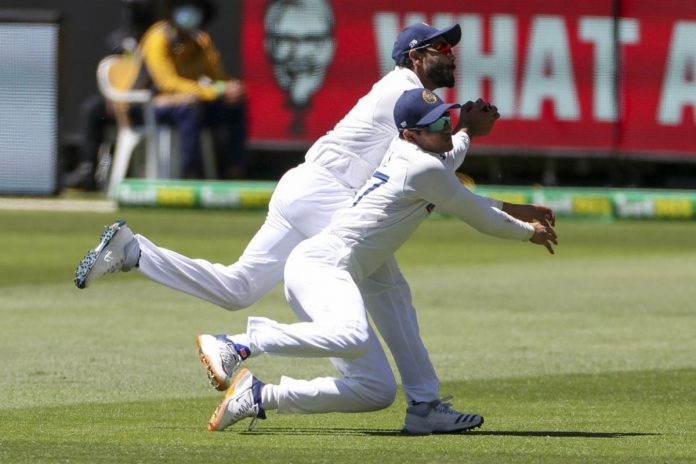 Team India took the field against the hosts in the prestigious Boxing Day test on Saturday morning. The visitors, playing five bowlers, were all over the Aussies in the first session and one of the crucial moments involved the dismissal of Matthew Wade courtesy of some fielding heroics from Ravindra Jadeja.

India started the test on a bright note after Jasprit Bumrah struck early to send back opener Joe Burns for a duck. The revamped bowling attack kept the pair of Matthew Wade and Marnus Labuschagne on their toes.

The wicket-keeper batsman was looking to counter-attack to shake off the early dismissal. Skipper Ajinkya Rahane roped in the services of Ravichandran Ashwin in the 11th over itself.

Introduction of spin early in the game worked wonders as the off-spinner was getting enough spin and bounce to threaten the pair. Keeping his aggressive intent going, Wade went for a wild slog off Ashwin delivery around the wicket.

The miscued shot went straight up in the air towards the leg-side with only height and no distance. Ravindra Jadeja, stationed at mid-on, was the obvious candidate for the catch.

However, debutant Shubman Gill also went for the catch running from short mid-wicket. Jadeja, sensing this, called for the catch in advance to avoid any possible confusion.

Despite the call, Gill kept on going with his run for the catch. The all-rounder completed the running catch and was almost instantly met with a minor collision from the incoming youngster.

Hovering with the tag of being one of the finest fielders around, Jadeja justified it by holding onto the ball in spite of the sudden collision. Watch the superb catch right below: