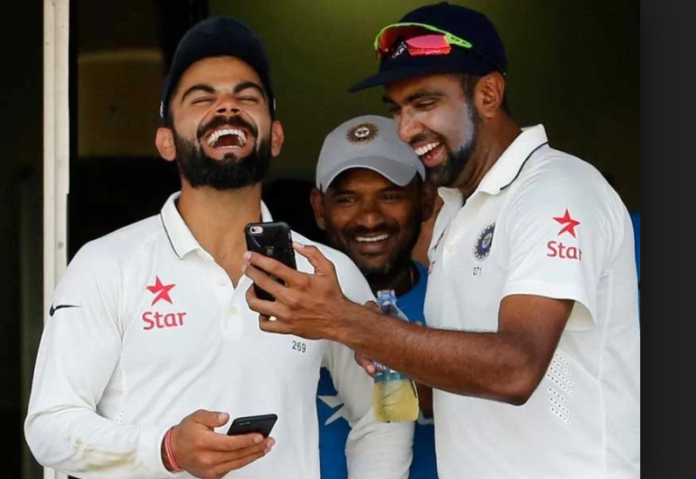 Ravichandran Ashwin vs Virat Kohli; Things heated up at the Chinnaswamy between the two skippers Kohli and Ashwin at the end of the game. We witnessed a lot of drama and emotions as both the teams were desperate to go over the line and take those two points that were on offer. However, the incident involving Virat Kohli and R Ashwin did manage to raise a lot of eyebrows as it was difficult to comprehend what transpired between the two players who share the same dressing room for India.

This is not the first time however that a piece of news about their differences has hit the media. It all started post the 2015 World Cup where India got knocked out in the semi-finals. Ashwin who was a star performer in the World Cup suddenly was struggling to get into the playing 11 in limited overs format and eventually also drifted apart from the squad.

Ashwin found it very difficult to hold his spot in the side with the limited amount of opportunities that he was getting. It was a baffling situation that the bowler who was treated as the matchwinner in the longer format was not able to sustain his spot in the limited overs format.

When Virat Kohli was chosen as the captain, Ashwin was left out in the first couple of matches against Pakistan and Sri Lanka in the ICC Champions Trophy 2017 at a time where he looked to be in a good rhythm.

Speaking to Ravi Shastri and VVS Laxman on being left out of the playing 11 he stated: “My professional ego was hurt.”  It seems as if the pain of being left out is still present somewhere that brings out all the emotions when he squares off against Kohli.

Reports suggest that Kohli wanted to exclude the off-spinner from the squad for the Champions Trophy itself, leave aside the question of the playing combinations. Kohli was never in favour of Ashwin and in fact, pitched names of players such as Yuzvendra Chahal and Shahbaz Nadeem. Kohli also accepted of having disagreements with Ashwin related to technical on-field issues. Reports also surfaced that during the alleged Kohli-Kumble rift, Ashwin sided with Kumble whereas all the other players decided to be on their skipper’s side.

Ashwin has also stated in the past about Kohli’s captaincy that he prefers to be in the thick of things and likes confrontation. However, sometimes he is so aggressive that it scares Ashwin at times, as a result, he has to be a little apprehensive before changing the field by himself.

After the current fiery send-off from Kohli that has been hogging all the limelight, Ashwin spoke about the incident in the post-match presentation “I just played with passion, so does he (Virat). That’s it. As simple as that,”

For those who are unaware, after the dismissal of Ashwin, Kohli gave him a fiery animated send-off and Ashwin clearly was not amused by it as he threw his gloves in rage toward the dugout.