With the 12th edition of Indian Premier League over, team India is all set for the ICC World Cup which starts from 30th May in England and Wales. 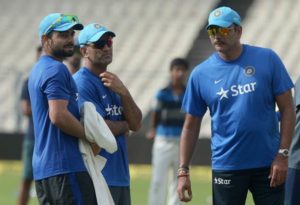 Indian cricket team coach now praised former Indian captain MS Dhoni and current Indian captain Virat Kohli. Having coached the national side under the captaincy both the players he said that the commitment both players have to the Indian team and each other is tremendous.

He also said that the team has all its bases covered going into the world cup.

“I think we have got all bases covered, really. The last thing you want is passengers on the tour. You want to have in those 15 players — a player who can play anytime, at any given time,” Shastri said.

India will play its first match against South Africa on June 5 in Southampton, England.

IPL 2019: Did Virat Kohli take a dig at R Ashwin for Mankading?