Team India are on the verge of an innings defeat against England in the third test at Headingly. However, this didn’t stop Ravi Ashwin from experimenting with his batting and confuse fans on Twitter. 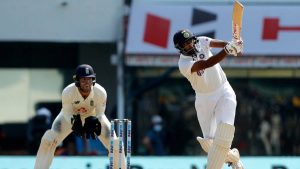 We have often seen Ashwin experiment with his bowling. He has added many variations in his arsenal. Ashwin was once seen bowling only leg spin in an IPL game. Now, he has psyched fans by sharing a picture of batting left handed.

Ashwin shared few pictures on his official Twitter account, in which he can be seen driving the ball straight. In another picture, he is content with leaving the ball alone. The off-spinner also gave a fitting caption to the post saying, ‘ignite something different.’

The desire to ignite something different every day never burns out. 🤜 🔥🔥🤩 pic.twitter.com/6U9s7LZpP6

As soon as the post went viral, many fans jokingly wrote how Ashwin is directly competing with all-rounder Ravindra Jadeja by batting left-handed. However, the pictures posted by Ashwin were mirrored images.

In gully cricket if some one doesn't play well right handers get a chance to play left handed and replace them.

whom are u replacing?😄

Breaking new : right hander ashwin not picked in 11
So he will play as a left hander now🥺

Left handed Ashwin on his way to overtake Lara 🔥🔥🔥✍️

Many experts and fans are bamboozled by the fact that Ashwin is yet to play in the ongoing high octane series between India and England. The Indian team is backing the combination of 4 pacers plus Jadeja as the lone spinner.

Jadeja provides more stability to the batting unit hence he is preferred over Ashwin. The pacers are doing a good job in the series so far. After their phenomenal effort in the last test at Lord’s, it was unlikely that Virat Kohli would change the playing eleven.

Ashwin is a key member in the Indian side. Currently, he is the no.2 ranked bowler in tests according to ICC rankings. He was exceptional in the series down under and even outperformed his counterpart Nathan Lyon on his home turf.

R Ashwin was also outstanding in the series against England at home early this year. Hence, he was adjudged the Man of the Series after picking up 32 wickets and scoring a century. But now it is to be seen whether Ashwin will get any opportunity to play in the rest of the series.