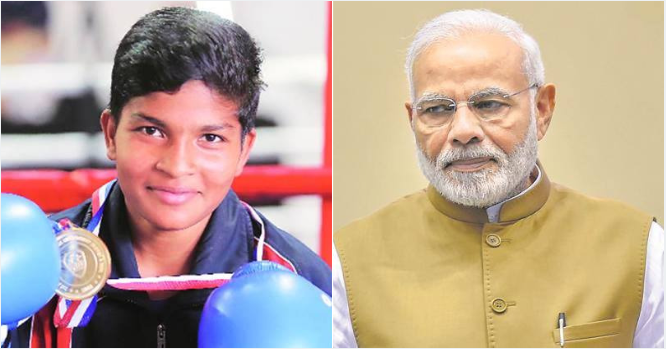 Last month over 750 boxers, including 300 girls participated in the second BFI Junior National Championships at the Chandigarh University. Out of all the participants, one boxer stood out amongst all of them.

Rajni Singh won a Gold medal at the Junior National Championship. What’s special about her was that she was mentioned by Prime Minister Narendra Modi in his monthly radio show Mann ki baat.

Rajni Singh has an incredible story, her training is funded by her father, who hails from Bauna Lakhu Village near Panipat and he lugs heavy metal cans on his old Rajdoot motorcycle, knocking on doors to sell lassi. 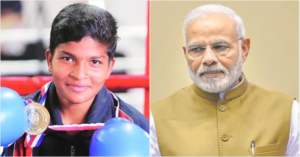 Rajni Singh is an extremely talented boxer who trains in Phul Singh Memorial Boxing Academy run by Malik. She won a Bronze medal at the Khelo India Games, which provided her with a lateral entry to a national camp, which took care of her diet and training. In August this year, Rajni won the gold medal at the Nations Junior Cup in Serbia, beating Russian Anastasia Kiriyenko in the final.

Modi praised Rajni and her parents and congratulated them. He said, “On winning the gold medal, Rajni ran to a milk stall and drank a glass of milk to honour her father Jasmer Singh, who sells lassi. She said her father had sacrificed a lot to help her reach this stage… When she expressed her desire to learn boxing, her father was determined to provide all possible resources, and encouraged her in her pursuit”.

Rajni says she still can’t believe that Prime Minister Modi praised her and said that she wants to win a gold medal and meet him.

“I still can’t believe that the Prime Minister spoke about me. For the last five years, boxing has been my life… Sometimes, I would train on an almost empty stomach as my father had to support the whole family and we would skip meals for each other. Last year, during the Khelo India Games, I missed the opening ceremony. My bout was on the same day, so I had to train. This year, I wish to win the gold medal at the Khelo India Games and meet Prime Minister Narendra Modi”.

After winning a medal at the Khelo India games, she has been getting 10,000 per months and wishes to save it to buy an electric motorcycle for her father.

“I am getting Rs 10,000 per month since August and have saved it in my account. I will save more money to buy a new motorcycle or electric vehicle for my father”.