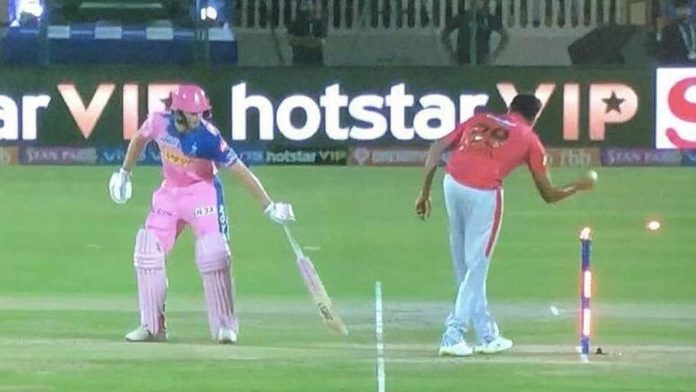 Spinner Ravichandran Ashwin and Indian Premier League (IPL) side Rajasthan Royals were involved in a “good banter” on New Year’s Eve, after the latter trolled Ashwin for his infamous ‘Mankad’ dismissal of Royals batsman Jos Buttler last campaign. Ashwin who also saw the funny side of this encounter, in return came up with a brilliant response as well.

It all started when the twitter admin of the Royals, shared a photo of a ball box with ‘Mankad’ written on all of them. The Jaipur based franchise, who were the victim of that infamous dismissal, wittily tweeted, “No points for guessing who is adding this to their cart for #IPL2020”.

No points for guessing who is adding this to their cart for #IPL2020 https://t.co/66sYUMosUp

Ashwin himself enjoyed this friendly banter and quickly came up with a hilarious response.

“Might well be a good collection for the non-strikers who meander along.  Good banter nevertheless. Wish you all a happy 2020,” he replied.

Might well be a good collection for the non strikers who meander along 😂😂👍🏻. Good banter nevertheless ☺️ wish you all a happy 2020. 🔥 https://t.co/fqD9WOCHTL

Last year, on March 25th, Rajasthan Royals welcomed Kings XI Punjab at home in their season-opener. Chasing a target of 185, the Royals were cruising at a point at 108-1 in the 12th over, when the former Kings XI captain stopped his bowling action and ran out Buttler as he (Buttler) left his ground at the non-striker’s end.

The dismissal which is known as a ‘Mankad’ (named after India bowler Vinoo Mankad who ran out Australian batsman Bill Brown in a similar manner in 1947), is within the laws but is debatable as to whether it is within the spirit of the game.

Naturally, the cricketing world was divided into two parts following the controversial incident; as some supported Ashwin, claiming what he did was legitimate, while the other-half heavily criticised the bowler for his conduct.

However, it appears that Ashwin hasn’t forgot about that incident and made clear intentions for the upcoming IPL season. During an interactive session on Twitter earlier this week, a fan asked him: “Who are the potential batsmen you can Mankad this IPL?”, to which he replied: “Anyone that goes out of the crease”.