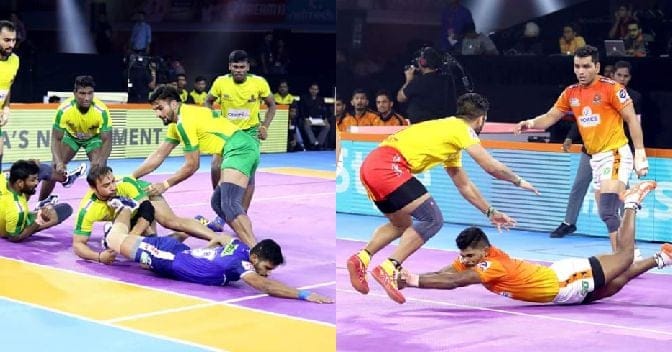 Day 1 of Pune leg of Pro Kabaddi Legaue season 7 at the Sree Shiv Chhatrapati Indoor Stadium in Pune saw a raid riot and high scoring games as Hosts Puneri Paltans and Haryana Steelers defeated their opposition by a considerable margin. It was a Nitin Tomar show as the star Pune raider came back to form and lighted the first game at Pune, he was complemnted very well by the Captain Surjeet Singh and defender Balasaheb Jadhav as both of them scored a high-five. In the other game of the day the Vikash Kandola and Vinay scored super-10’s and consolidated their position in top 6. 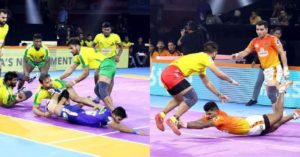 The Fortunegiants started of well but the defensive duo of Surjeet Singh and Balasaheb Jadhav came into the act and restricted the two-time runner-ups who were very well complemented by star raider Nitin Tomar and Manjeet where the latter scored a super-10 . for the fortunegiants it was Sachin who looked in form whereas nobody performed upto the mark.

Haryana Steelers looked very well settled as raiders Vikas Kadola and Vinay scored a super-10 and were very well complemented by defenders Dharmaraj Cherlathan and Vikas Kale. For the Thalaivas it was yet another disappointing performance in the defense as star defender and stand-in captain Manjeet Chillar didn’t perform upto the mark and looked rusty. Riaders Rahul Chaudhari and Ajeet were the silver-lining for the Thalaivas in today’s game as both of them scored 19 raid points in total.