The match-up between Rahul Panicker and Akash Kumar is one of the most awaited match-ups in Indian Arm Wrestling. The pair have been scheduled to collide numerous times before, but the match-up has never come to fruition either in super match set-up or in the National championship.

Rahul Panicker is one of the most dominating 70 KG Arm Wrestlers in India and he is a 10-time Kerala State Champion, 8-time National Champion, and also a champion in the UAE. He is known for his aggressive top roll and he became a worldwide sensation last year when he defeated Larry Wheels in an Arm Wrestling match. 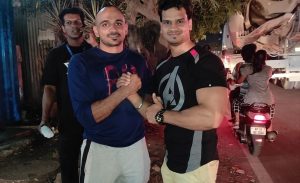 “The match between me and Rahul Panicker has become one of the most awaited match-ups in India. In 2019, me and Rahul could have pulled if I had participated in the IAF Nationals. But because of certain circumstances, I couldn’t go there and now three years have passed and I have tried to arrange a match against him, but the plan didn’t come to fruition.

“I have always wanted to pull him and I don’t know what the result is going to be, but I am just happy to be able to compete against him,” Akash Kumar said.

The pair have also registered for the Pro Panja League’s Ranking tournament taking place in Gwalior from 22nd July to 24th July.