The 27-year-old shooter Rahi Sarnobat did wonders at the 25m Pistol event as she became the first Women shooter for India to claim the highest spot in history. Her inspiration has been another legendary 50m rifle prone world champion Tejaswani Sawant, who is also her coach now. 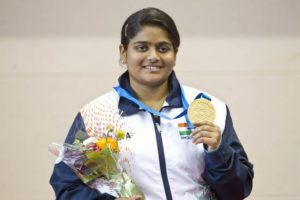 Sarnobat faced a tough challenge from Naphaswan Yangpaiboon, the shooter from Thailand whom she later vanquished by a record score of 34 which led her to win the title.

Rahi previously achieved a Bronze medal at the World Cup 2011 and got selected for the London Olympics next year. She also achieved a bronze medal at Icheon on 2014 Asian Games, Commonwealth Gold (2010,2014) and Silver (2010)

She received the very prestigious Arjuna Award in May 2015 after being recommended from the National Rifle Association of India which is another reason to laud her.