Veteran India spinner Harbhajan Singh was in his peak when Ravichandran Ashwin was trying to cement his place in India team. But the Tamil Nadu player didn’t take much time to become the first choice spinner in the playing XI while the Harbhajan Singh was struggling to find a place in the longer format of the game. 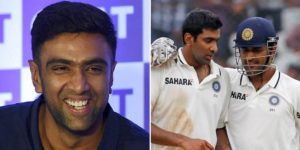 Ravichandran Ashwin made his Test debut way back in 2011 and become a regular in the team within no time. Harbhajan Singh soon lost his place across formats who last featured for India in 2016. However, he has played 103 Tests with the final was in 2015. On the other hand, Ravichandran Ashwin has played 71 Tests ever since he made his debut in 2011.

Ravichandran Ashwin recently spoke about how he replaced the veteran Harbhajan Singh in the team. He revealed that he did not really feel any pressure while replacing his experienced teammate and also claimed that former India captain MS Dhoni had always backed him.

“It is always huge to play for your country. It is an honour and a dream come true for a cricketer, a real landmark. This helped me initially and I settled in the role pretty well. I had also played a lot of domestic cricket by then,” he said to Hindustan Times.

“There was no pressure as such. I enjoyed playing for India when I got the chance. I never thought I was filling someone else’s shoes. I created my own space as time went by. (Captain) Dhoni also helped me gain confidence by always backing me,” he further added.

Meanwhile, Harbhajan Singh is still considered as one of the best off-spinner in Tests India have ever produced. With 417 wickets in the Test cricket, he holds the record for the highest wickets taken by an Indian off-spinner. On the other hand, Ravichandran Ashwin has 365 wickets currently in the format and if he gets more chances, he would like to surpass his former teammate as well.

When Ashwin bowled against Australia with a muscle tear!