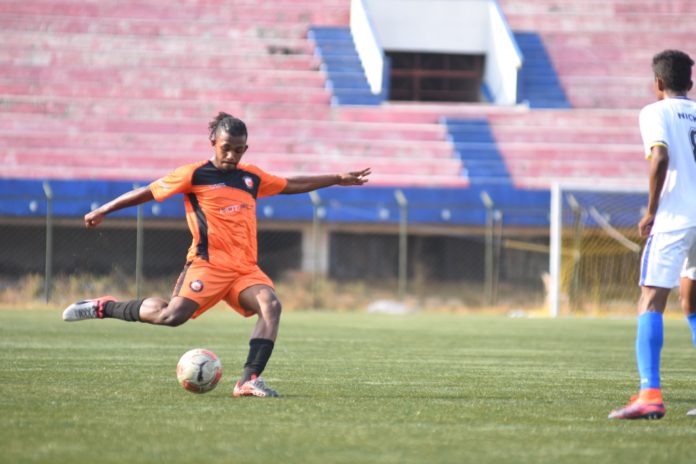 Bengaluru, September 24, 2018: Strikes from Magesh and Lokesh saw South United FC beat ADE FC 2-0 in their first Puttaiah Memorial Cup Game. The orange-clad South United saw a man sent off in the final few minutes but it had no bearing on the result.

In the first match of Zone B, South United took an early lead against ADE FC through their talismanic captain Magesh. The goal came as new signing Aaron crossed the ball in from the left flank all the way to the other end of the pitch only for Mani to cut it back into the onrushing Magesh who smashed the ball home with a first time left-footed shot.

South United FC created several chances but was unable to finish them off as the first half flowed on. Their keeper Jayant remained largely untested for the entirety of the half.

ADE FC began the second half well and put the orange clad South United FC under some pressure. It resulted to naught as they rallied back strongly to claw back some semblance of control. Midway through the second half, Henderson, the South United striker made way for Chander, and Aaron switched to a more advanced role. The change saw South United renewed with some dynamism and they would seal their victory in the final 20 minutes through a strike by Lokesh.

A couple of good plays and attempts by ADE FC to salvage something from the game did not come to fruition. The final few minutes saw SUFC substitute Chander sent off for a poor challenge but the men in orange had enough composure to see out their first game of the tournament with a 2-0 victory.