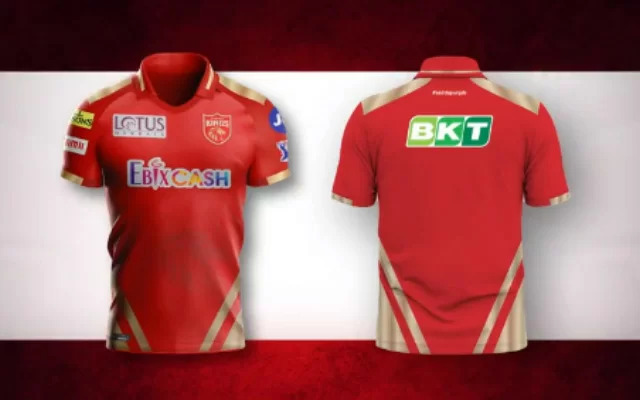 Punjab Kings is the latest franchise to unfurl their colors for the upcoming IPL 2022 season. The 15th edition of the tournament will begin on March 26, with four stadiums in Maharashtra slated to host the matches.

The Punjab Kings have released a kit that is similar to their inaugural kit last season. The franchise, led by Mayank Agarwal will don red and gold while holding the same kit sponsors. Have a look at the new jersey right below:

The 2014 IPL finalists were the only team to retain two players ahead of the mega auction. The franchise, who went into the two-day event with the highest purse out of all 10 sides, built a formidable squad with a rich blend of experience and youth.

Punjab Kings will open their IPL campaign against Royal Challengers Bangalore at the DY Patil Stadium in Mumbai.

The two-time IPL champions also brought out their new kit earlier today. Following the end of their deal with sponsor Mobile Premier League (MPL), who have been sponsoring the franchise for the last two years, KKR have a new sponsor in the form of gaming platform Winzo. Have a look at the reported new jersey, which has been making the rounds below:

Retaining their traditional purple and gold look, KKR will brandish their new jersey in the IPL 2022 opener against defending champions Chennai Super Kings on March 26 at the Wankhede Stadium in Mumbai.

After parting ways with Eoin Morgan, the team have appointed Shreyas Iyer as their new captain. The franchise roped in the 26-year-old for a sum of INR 12.25 crore at the mega auction last month.