Team India have registered a convincing 8-wicket win over Australia in the second test. After the win, the Indian players were seen in a joyous mood on Tuesday. To extend that, veteran spinner Ravichandran Ashwin took to Instagram and posted a picture. Alongside him, Ravindra Jadeja, Umesh Yadav, Cheteshwar Pujara, Ajinkya Rahane and Jasprit Bumrah were also seen. 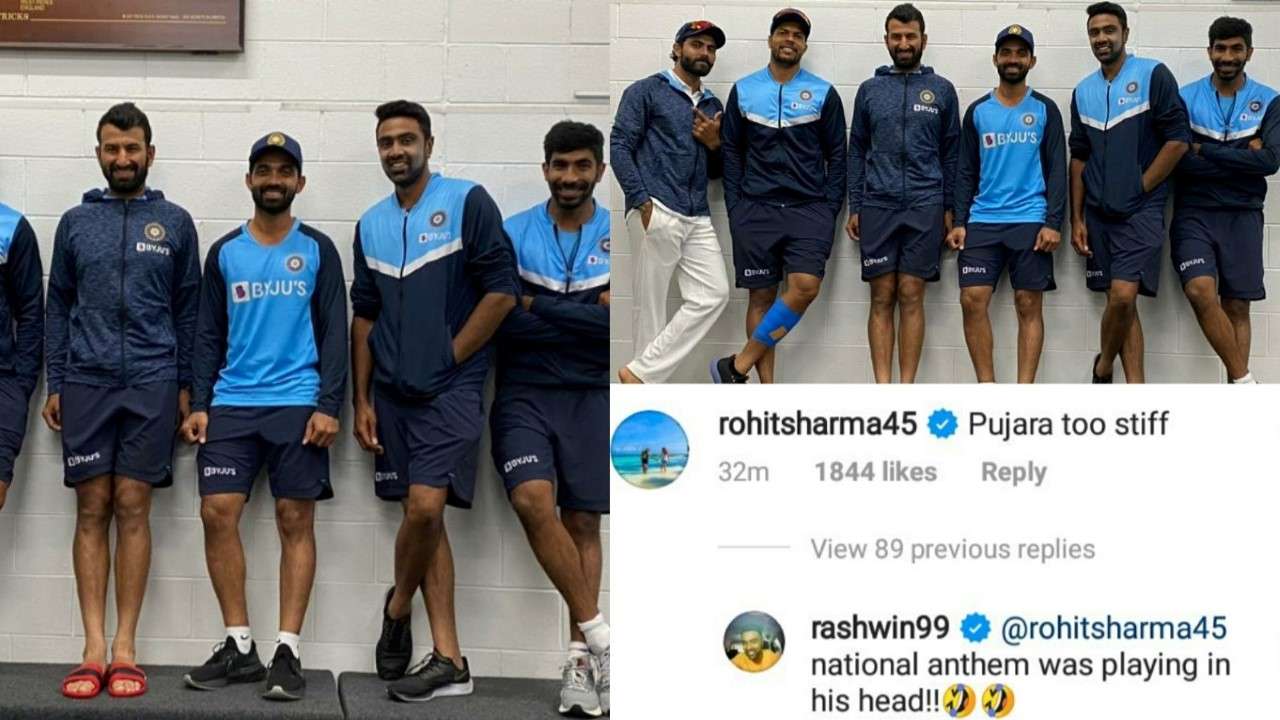 While fans started reacting on the post, it was Pujara who took the limelight away from others. Other players were seen in a relaxed mood but Pujara was seen standing straight and in an attention position as well. His standing position left many in laugh, including Rohit Sharma who shared a  funny comment over Pujara’s pose in the group photo.

Taking a dig at it, Rohit Sharma added: “Pujara too stiff.” To this, Ashwin replied: “@rohitsharma45 national anthem was playing in his head!!”

When your backs are up against the wall, lean back and enjoy the support of the wall!! Well done to the entire team and what a win that was💯🔥🔥🔥🥳🥳.
Special mention to Mohd Siraj and @RealShubmanGill 👏👏..@ajinkyarahane88 @cheteshwar1 @Jaspritbumrah93 @y_umesh @imjadeja pic.twitter.com/4t8IlxZFlW

With no Virat Kohli, Rohit Sharma, Ishant Sharma and Mohammad Shami, Team India secured an eight-wicket win over Australia in the Boxing Day Test where two players made their debut as well – Shubman Gill and Mohammed Siraj. Their bounce back after having faced a humiliating defeat of getting bowled out for 36 at the Adelaide Oval, and level the series is certainly praiseworthy.

With this win, the team has reached a step closer to the final of the World Test Championship as well. Stand-in captain Ajinkya Rahane smashed a century whereas Ravindra Jadeja scored fifty and their partnership took the team to a stable position on day three. Later, they dismissed the mighty Aussies for 200 and successfully chased down the target of 70 in only 15.5 overs on day four.

Meanwhile, India’s stylish opening batsman Rohit Sharma, who has recovered well from his hamstring injury and has currently been under quarantine in Sydney, will join the Test squad in Melbourne on Wednesday. However, there is still no surety on whether he will be featured in the third Test which is starting from January 7.

India head coach Ravi Shastri on Tuesday said to the media that the team management will talk to him about how his condition is before taking a call on his availability.

“Rohit joins the team tomorrow. We will have a chat with him to see where he is placed physically because he has been quarantined for a couple of weeks. We will have to see now how he feels before we take the call,” said Shastri.