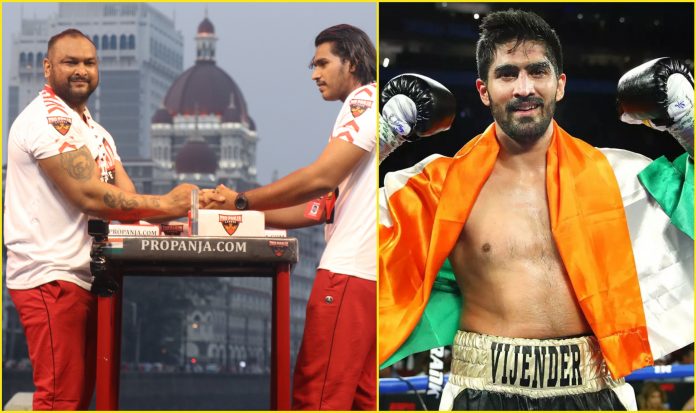 What comes to your mind when you think about Las Vegas? It’s most probably going to be Casino, Poker, Sportsbooks, expensive hotels and boxing matches.

For decades, it was New York City which was considered as the Mecca of Boxing, but now Las Vegas has taken that crown and over the last two decades it has hosted the biggest fights in the history of boxing.

While India doesn’t have a Las Vegas equivalent of Boxing, IOS Sports is looking to change that with its upcoming event in Goa. IOS Sports is set to host Olympic medalist and former WBO Asia Pacific and Oriental Super Middleweight Champion Vijender Singh’s upcoming professional boxing bout against Artysh Lopsan of Russia.

IOS Sports and Entertainment has also partnered with Swen Entertainment to bring Asia’s largest and the world’s fastest-growing Arm Wrestling organisation, the Pro Panja League to the Majestic Pride Casino Ship in Goa. The event which is billed as ‘Battle on Ship’ will feature six boxing bouts and two Arm Wrestling bouts.

The event will take place on March 19 and will stream on BookMyShow and Fancode.

There’s a holy relationship between Casinos and Boxing events as evident from Las Vegas being the boxing capital of the world and now it looks like that something similar is happening in Goa.

Goa is one of the few states in India that has legalised Casino operations and the Casino’s present there is already a hit amongst gambling high rollers and poker players. With a big name like Vijender Singh fighting in an offshore Casino ship in Goa, it is bound to attract more boxing promoters and other sports organisations to Goa.

“What the IOS Sports and Entertainment Group has done by having Vijender’s fight on the top of the casino boat is path-breaking. Of course, there have been fights in Casinos and Las Vegas is famous for that and we are creating a Las Vegas like Sports atmosphere.

“For Pro Panja League to be a part of this path-breaking event, where we are going to have two Arm Wrestling matches on top of a casino boat is magnificent. I don’t think either me, the Arm Wrestlers or anybody else would have ever imagined a year ago that our bouts would be happening in an atmosphere like this. But I think it’s also a testimony to the fact that the Pro Panja League always try to be innovative and path-breaking. We are very honoured to have that opportunity which is given to us by the CEO of IOS Sports. Mr Neerav Tomar and Vijender Singh Bhai who has supported us from the very beginning. They had supported us in our very first event in Delhi and we are very grateful for that support,” the Owner of Pro Panja League Mr Parvin Dabas said.

The Pro Panja Mega Matches-2 will feature Siddharth Malakar, the 90kgs champ from the Pro Panja ranking tournament held in Delhi. Siddharth Malakar will take on the 100 KG Mega Champion Sunil Kumar, which will see both Arm Wrestlers vying for supremacy in the upper weight classes. The winner will be awarded the ‘Super Champ’ title. This bout will take place just before the main event fight between Vijender Singh and Artysh Lopsan.

The event will also feature the Under 65 kg Champ Chetna Sharma, who will take on second seed Parmpreet Kaur of Punjab who is fresh off of a win over Delhi’s Karishma Kapoor at Pro Panja Mega Match-1.

“It’s a very exciting time for the Pro Panja League to be featured on the same fight card as Vijender Singh. It’s a very big deal and our athletes are very excited as are we.

“We are also very excited to be there and fight on the Majestic Pride Casino ship, which is an absolutely beautiful ship and we are expecting some great crowd. There’s also a huge hype surrounding Pro Panja League in Goa and everyone is excited to watch the Panja bouts along with the boxing matches,” Preeti Jhangiani, co-owner of the Pro Panja League said.