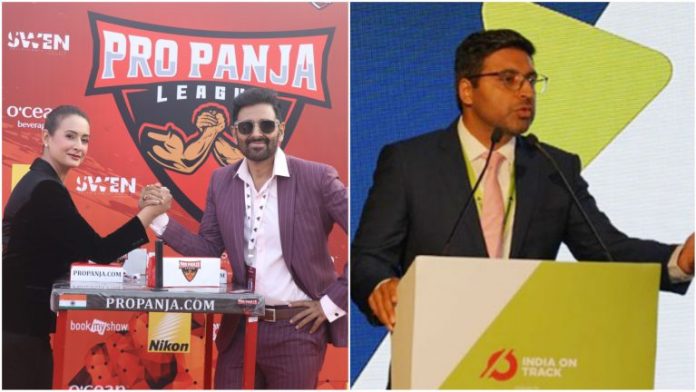 In the past few years, Pro Panja League has been on an astounding climb to success in popularizing the sport of Arm Wrestling in India, and is gaining worldwide recognition.

Sanctioned by the Indian Arm Wrestling Federation, PPL has already seen three highly prosperous events, starting with the first ranked tournament in 2020, followed by Pro Panja Mega Matches-1 earlier in February this year and the third event had taken place on the undercard of Vijender Singh vs Artysh Lopsan at Majestic Pride Casino Ship in Goa on March 19.

Now with the stupendous growth of PPL, the sport of Panja, one of the most predominant indoor sports in India, is entering the professional sphere with arm wrestlers from each and every corner of the country partaking in the league.

On the heels of PPL’s monumental success, it is proudly joining hands with India on Track, a privately-held sports development firm as its official partner in its future tournaments and other endeavours- all in all, to grow Panja as one of the biggest professional sports.

“I’m very excited to be working with India on Track – IoT, led by Mr Vivek Sethia and his brilliant team,” Pro Panja League owner Mr Parvin Dabas spoke to SportsIndiaShow. “From the beginning, we have really gotten together and our synergies seem to be matched very well and we both have a very strong passion for sports and I think that is what I’m always looking for, whether the person who heads the agency company has a passion for sports and is a fan, not just a business person.

“It needs to be a very good combination of both, and I think in IoT and Mr Vivek Sethia, we have found the perfect partner of somebody who looks at sports with both passion and as a fanboy and also with a great, great business sense. So we look forward to this partnership taking Pro Panja League to even greater heights,” Mr Dabas added.

“India On Track is proud to partner with Swen Entertainment to conceptualise, launch and promote India’s first professional panja league. We share in the vision of Parvin Dabas and Preeti Jhangiani, in developing the sport and scaling new heights,” said Vivek Sethia, the CEO of IoT.

“Panja is predominantly an Indian sport with a mass following in both urban and rural. Utilising our expertise and understanding of the sports ecosystem in Indian, we will work to bring together all like minded stakeholders, who share our beliefs to grow India’s indigenous sports and turn it into a commercially sustainable league model,” Mr Sethia further asserted.