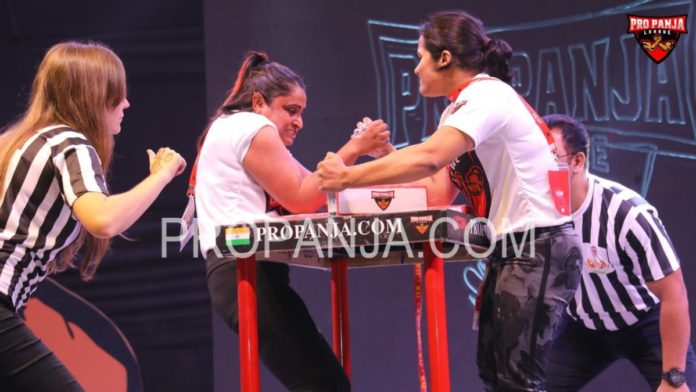 The Pro Panja League which held its inaugural season at the end of February has made Arm Wrestling in India an absolute fan favourite sport.

The event was a massive success and to give an idea to our readers as to how big this event was, Mr Kiren Rijiju (current Minister of State of the Ministry of Youth Affairs and Sports), Indian boxing star and current WBO Oriental and WBO Asia-Pacific super middleweight champion Vijender Singh were also present at the event. 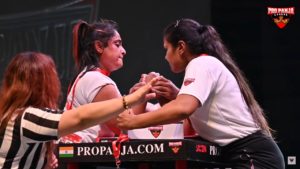 The event was open to both male and female arm wrestlers. One of the female wrestlers that put up an interesting show for the crowd was Punjab’s, Parampreet Kaur. She won the silver medal in the women’s under-65 kg category.

Hailing from Raikot, a small own near Ludhiana, Parampreet didn’t start Arm Wrestling until 2017. Prior to switching to Arm Wrestling, she was a weightlifter and only tried the sport after being recommended by someone else.

“Earlier I was a weightlifter, and then someone noticed that I had quite a good arm strength and that I should try my luck in Arm Wrestling,” Parampreet Kaur said in an interview with Riya Bisht.

“Initially I just tried it for fun and in 2017, I participated in my first nationals and in that tournament I played ‘Quite OK’. I didn’t know much about the sport and was very clueless as to what should I be doing at the table or if there was any particular technique for Arm Wrestling.

“When people saw me at the Nationals, they naturally assumed that I was a powerful and strong veteran as I had quite a good shoulders. But they didn’t know that it was my first time at a tournament and I had little to no clue about what was going on,” she added.

However, the first tournament didn’t go her way as after being insulted by the people at the tournament, I decided to give the sport my full attention.

“When I was at the table and lost my match, someone from behind told me that ‘I was being way too much overconfident’…and this sparked an interest in me and I decided to take the sport more seriously. So I trained for a year under a coach and won a gold medal in the 2018 Nationals” Parampreet concluded.

Speaking to Riya, she further added that, prior to taking part in Pro Panja League earlier this year, she had never seen a professional stage set for the Arm Wrestling in a way that PPL had done it.

“I was very happy to be a part of the Pro Panja League…I have taken part in competition in other sports as well like weightlifting and all but in my opinion, PPL’s bar was set very high and no other league can even match what PPL brings to the table. It made me feel proud about myself to be able to compete,” Parampreet said.

“Through PPL, foreign athletes come to know about us. They probably didn’t even know that there are so many good arm wrestlers in India. Whenever you search for videos of Arm Wrestler, majority of the time, you would only see foreign players, but now even Indian athletes have a chance of getting their name out there,” Parampreet said.

Pro Panja League 2020: How the event whipped up a media storm in India!