The event begins on 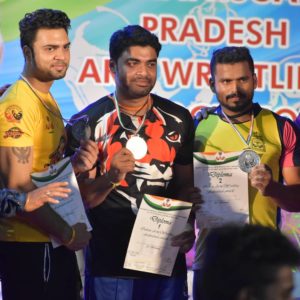 My name is Siddharth Malakar, I am 27 years old and I come from Guwahati, Assam.

2.) Which weight category do you compete in and which is your competing arm?

Usually, I compete at below 85kg category, but this year I will probably be competing in the 90kg category.

3.) When did you decide that you want to become a professional athlete in arm wrestling? which was your first arm wrestling tournament?

All credit goes to Mr Pran Pratim Chaliha (Treasurer Indian arm wrestling federation), who got me into arm-wrestling when I was playing during my college week. So he was interested in taking me to the professional level. so he took me eventually and then I met lof of athletes who competed professionally in gyms in Guwahati. So I took admissions in those gyms and started playing professionally.

My first arm wrestling tournament was in 2015. That year the nationals took place in Bazpur, Uttarakhand.

I enjoy the sport very much. It was more of a hobby for me and I didn’t think it would turn into a profession. I work as a physiotherapist and it is my day job. I liked arm-wrestling ever since I was a little kid, but I never knew that it was also played professionally. So when I learned the opportunity it offered as a professional, I dedicated myself to the sport.

I left all the other sports like Cricket and football for Arm Wrestling. I completely drowned myself in arm wrestling and it started to pay off (medal in nationals). Now I don’t think I can quit this sport as this has become an addiction.

5.) What is your goal in arm wrestling? Is there any arm wrestler that you admire?

6.) If there is one Bollywood character that you most relate to, who would that be and why?

My favourite Bollywood actor is Farhan Akhtar. I admire him because of his physical fitness and for his roles in athletic movies like Bhaag Milkha Bhaag.