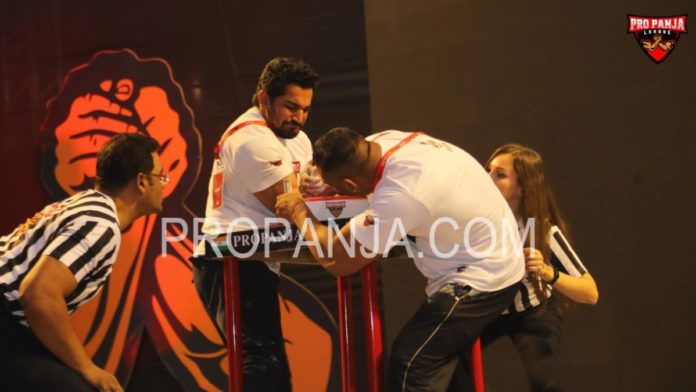 The Pro Panja League which held its inaugural season at the end of February has made Arm Wrestling in India an absolute fan favorite sport.

The event was a massive success and to give an idea to our readers as to how big this event was, Mr. Kiren Rijiju (current Minister of State of the Ministry of Youth Affairs and Sports), Indian boxing star and current WBO Oriental and WBO Asia-Pacific super middleweight champion Vijender Singh were also present at the event.

Arm Wrestlers from across the country took part in the event and if there’s a weight class that managed to grab the maximum attention of the fans seating at the stands, it was the heavyweight category (100 kg). 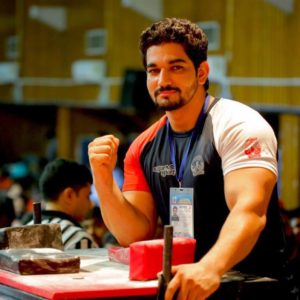 Owner of Pro Panja League, Mr. Parvin Dabas had a nice chat with the 100kg silver medalist Sanjay Deswal.  In an action-packed battle of the heavyweights, Sunil Kumar and Sanjay Deswal gave us a tremendous back and forth throughout the three rounds in the PPL finals.

Throughout the prelims, he defeated top heavyweights like Arjas TP, MD Hashim, etc. Hailing from Delhi, the 31-year old started Arm Wrestling 10-years ago under the guidance of coach Laxman Singh Bhandari.

Like many arm wrestlers around the world, Sanjay discovered his love and passion for the sport growing up and competing against his friends in high school.

“Later I came to know that there are professional arm-wrestling tournaments as well and my gym coach told me about an arm-wrestling competition and he asked me if I was interested in participating in it. I quickly agreed to it as I always used to win against my friends and I was fairly confident that I would win in this professional tournament as well. In that tournament, I secured the second position and this boosted my confidence level as I hadn’t participated in a professional tournament before and despite that, I won a silver medal, and then I decided to pursue the sport seriously.” Sanjay added.

While Panja is definitely Sanjay’s passion, the Delhi based Arm Wrestler also has a full-time job. He revealed how he manages time juggling between Arm Wrestling and his work.

While the sport of Panja was popular amongst the masses throughout the country, many people don’t know the fact that there are national competitions held every year. Sanjay emphasized on the fact that PPL will benefit the athletes in a way that National tournaments in India couldn’t do previously. He also didn’t think that PPL would be this good.

“Many arm wrestlers were waiting for a tournament that could benefit them. Till now the competitions would happen and some athletes would win, but there’s no path of what the athlete should do next. They all have to wait for the next tournament. But with Pro Panja League, we can be associated with the organization for a longer time. PPL has also helped in promoting the athletes as visible in the recent interviews and tell their story to the rest of the country,” he added.

“The tournament was better than I expected….the way the event was organized and divided into prelims and the main event and the way the red carpet was laid out for the athletes to walk out for their finals…it was the best and no Arm Wrestling tournament in India was as good as this. I enjoyed the whole experience and I would say that those who weren’t able to come have missed out on an amazing competition.

“I never thought that Sports Minister of India Mr. Kiren Rijiju and Vijender Singh would be chief guests in an arm-wrestling event because it’s not a big sport, but thanks to Pro Panja League, it will become a huge sport,” Deswal concluded.