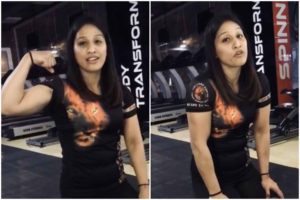 For this profile, Sports India Show interviewed Pooja Bisht, who won a gold medal in the nationals last year in the 55kg women’s category.

My name is Pooja Bisht and I am 24-years old. I hail from Delhi.

Previously I used to compete at 55kg category and have won gold medals in both right and left hand in the 2019 nationals in Bhilai. But for the Pro Panja League, I am competing at below 65kg category.

3) When did you first start arm wrestling?

I started my arm wrestling career since 2015. However, I have been competing at the national levels for the last four years. My first arm wrestling nationals was in 2016.

5) How would you describe your approach to arm wrestling?

I love the sport, this is the best sport. I find Arm Wrestling very entertaining. I am also training very hard for the Pro Panja League in my Club. I represent Lions Empire Sports Club, which is in Karol Bagh. My coach is Arvinder Pal Singh and he is training me very well for the upcoming league.

I am working very hard and hope to win at PPL later this month.

6) What is your goal in arm wrestling? Is there any arm wrestler that you admire?

I am hoping to take part in the world arm wrestling championship and other international events like WAL (World Arm Wrestling League).

Pooja Bisht is ready for Pro Panja League 🔥🔥🔥Hailing from Delhi, she won a gold medal in the 2019 Nationals.Indian Arm Wrestling Federation#ProPanjaLeague #PPL

At the international level in the men’s category, I admire Devon Larratt and in the female category Sara Backman (former eight-time World Arm Wrestling Champion)

7) Is there is one Bollywood character that you most relate to or admire and why?

I really admire Hrithik Roshan because of the healthy lifestyle that he promotes. He is also a fitness freak and going strong at 46.