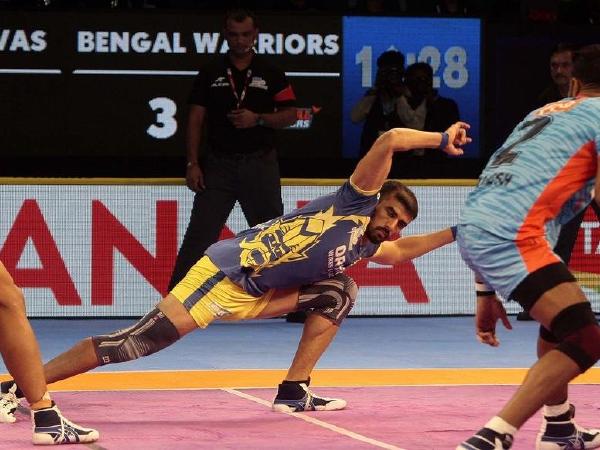 Jaipur Pink Panthers eased past Puneri Paltans 36-23 in the Zone A of the 2018 Pro Kabaddi League. In the Zone B, Bengal Warriors battered Tamil Thalaivas 28-21 to keep their semi-final hopes alive.

In the Zone B, Bengal Warriors climb to the fourth position with 48 points from 16 matches. Tamil Thalaivas, on the other hand, languish on the bottom of the pile with 35 points from 19 matches.

The game between Jaipur and Pune was a close one until the former took a 12-7 lead. They further extended it to an unassailable 21-8 one and the Pune team couldn’t narrow it down. The thirteen point gap was maintained and the game finished 36-23 in favor of the Pink Panthers.

In the latter game, Tamil Thalaivas took a 6-3 lead in the initial stages of the match. However, the Bengal Warriors reduced the deficit at 8-8. Bhupinder Singh’s raid at the 4th minute of the second half gave them a 16-13 lead. The Bengal Warriors held onto the lead to see off the challenge with a 28-21 victory.