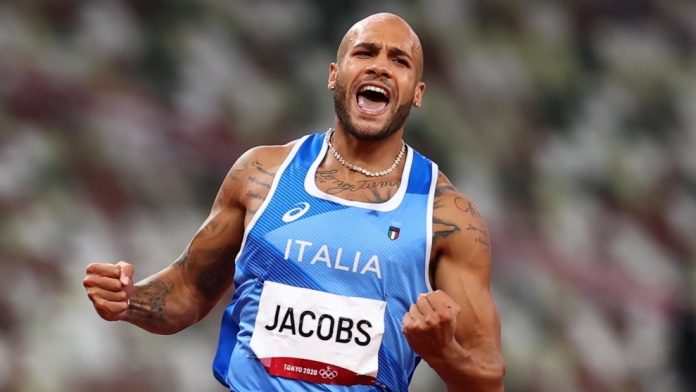 Before his retirement, Usain Bolt reigned over the 100m and 200m events on the world stage. However, in his absence, a group of unusual suspects lined up to claim the gold in the men’s 100 meters at the 2021 Olympics in Tokyo. The 26-year-old Italian athlete clocked a European record of 9.80 seconds to emerge the winner. American Fred Kerley went home with the silver after clocking 9.84 seconds. The tournament’s bronze went to Andre de Grasse of Canada, who finished the sprint in 9.89 seconds. Andre also won the Bronze medal at the 2016 Rio Games.

Speaking after his achievement, Jacobs claimed that it all felt like a dream. The athlete, born in Texas, had gone below the 10 seconds barrier twice in his previous attempts. The jubilant Italian also revealed that winning an Olympic medal had been his childhood dream, and he was glad that his dream came true in 2021. 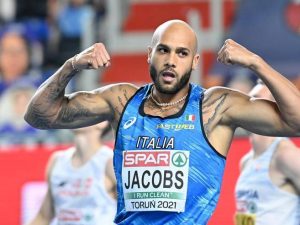 When asked about the performance, Kerley revealed that he knew very little about the Italian sprinter. Kerley stated that he had only raced with Jacobs once in Monaco. On the other hand, De Grasse claimed that he was happy with his performances at the Olympics after achieving a personal best. It was particularly important for him to win a medal after coming back from injury.

The Canadian athlete also stated that he did not expect Jacobs to win the race. De Grasse told Betway Insider that the stories in the media rooting for him and claiming that he is going to do greater things usually inspire him and keep him focused.

The finalists were introduced spectacularly. Then, the floodlights lighting the stadium were shut off, allowing 12 projectors to cast 3D images of the world, focusing on the Tokyo skyline and then the name of the sprinters.

On lane three was Jacobs donning a light blue singlet and lycra shorts. He made the perfect start, remained calm through the drive phase, and powered through to the finish line. He ran blissfully into the arms of Gianmarco Tamberi, his Italian teammate who had won gold in the men’s high jump and was waiting at the finish line. Tamberi agreed to share his gold medal with Mutaz Barshim as both athletes had not missed a jump until they reached the 2.39 meters mark.

Where Were The Jamaicans?

The race was run in smothering temperatures of 30 degrees Celsius and had a noticeably underwhelming build-up. The exit of hot favorite Trayvon Bromell in the semi-finals seemed to take the excitement out of the finals. Jacobs and China’s Su Bingtian were the unexpected heroes as they set new European and Asian records, respectively.

Trayvon Bromell was the US Olympic Trials champion. He was also the owner of the fastest time of the year with a personal best of 9.77. However, he did not make it to the final after clocking 10.00 to finish fourth in his semi-final heat. Tray was making a comeback after a series of injuries that saw him go under the knife on his Achilles.

The Tokyo edition of the Olympics was the first since 2004 to happen without Usain Bolt. The Jamaican sprinter won three successive Olympic 100 meters titles in Beijing, London, and Rio de Janeiro. He also won three straight 200 meters titles.

This year’s event was the first one since 2000 in Sydney Games that there was no Jamaican sprinter in the final. Yohan Blake, Bolt’s long-time former teammate, bowed out of the competition at the semi-finals.

Instead, the field was full of relatively unknown faces, with Jacobs’ major achievement being his European 60m indoor title earlier this year. As a result, Tokyo’s 100meters event was arguably a pale imitation of the previous tournaments. Usain Bolt was a charismatic presence in the tournament, attracting a massive global audience.

The spectacle that Bolt brought to the events has been missing since his retirement in 2017. Moreover, the event has been without any exciting new talent of sprinting hopes. There have been many athletes tipped as Bolt’s successors, but none has lived up to the substantial weight of expectation.

To make it worse, the 68000 seater Olympic Stadium had no fans because of the COVID-19 restrictions in Tokyo. As a result, there were a few pockets of athletes and team officials who tried hard to recreate the atmosphere with little success.

The bookmakers had given Jacobs a 3% chance of winning. Before heading to the Japanese capital, Jacobs had only run 100 meters under ten seconds twice in his life. He ran 9.95 seconds at International Meet held in Savona in May and managed 9.99 seconds at the Diamond League in Monaco two weeks before coming to the Olympics. Until the heats, Jacobs did not even feature among the top 10 fastest runners in 2021.