Before you enter the world of Online Casinos, Check out the top 10 Live casinos recommended by India Casino Info
Home Cricket Pollard pulls off a unique protest against the umpires in the finals 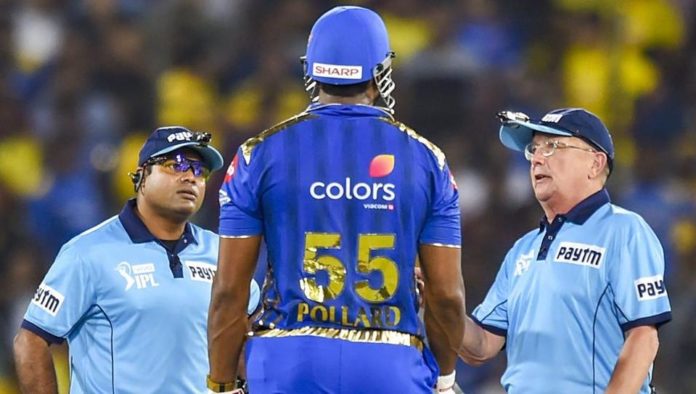 West Indians and their unique style on the cricket field are very famous. Right from the celebrations to the way they show their descent on the field. For instance, Bravo’s dance and Pollard shutting his mouth with a tape in one of the IPL matches. Something similar happened in the finals of the IPL on Sunday as well.

When Bravo was bowling to Pollard in the final over, Pollard kept shuffling. To contradict this shuffling, Bravo bowled the ball outside the tramline, thrice to get three dot balls. After the third dot, Pollard was really frustrated about the umpire not calling it a wide. He flipped his bat into the air but did not say a word.

When Bravo started his run-up for the next delivery, Pollard deliberately left the stumps and kept walking towards the tramline. This gesture of the big man immediately led both the on-field umpires to walk up to Pollard and have a word. There wasn’t any verbal protest from the batsman as he just heard what the umpires had to say.

Pollard had the last laugh against Bravo as he hammered his national teammate for two consecutive boundaries through the covers, in the final two deliveries. Pollard who was the birthday-boy ended up as the highest scorer of the MI team with 41 runs off 25 balls.