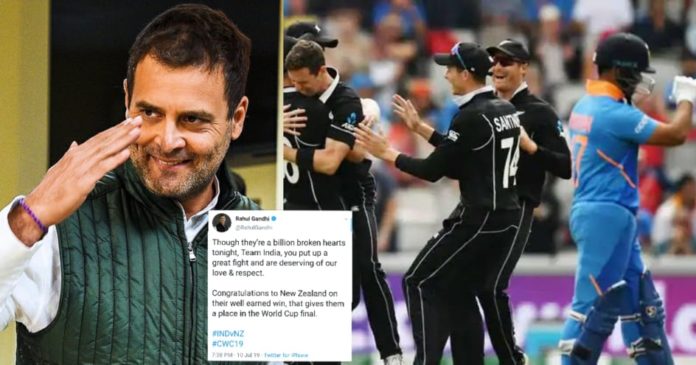 Today, a million hearts broke as team India, the best team of the World Cup, crashed out of the tournament. It was the blackcaps who got the better of Kohli’s men in Manchester today. It was a horrible first 10 overs of batting of India that turned the match in New Zealand’s favour. Post the match, there were many tweets which applauded the effort of the Indian team throughout the World Cup. One such tweet came from Congress leader Rahul Gandhi. 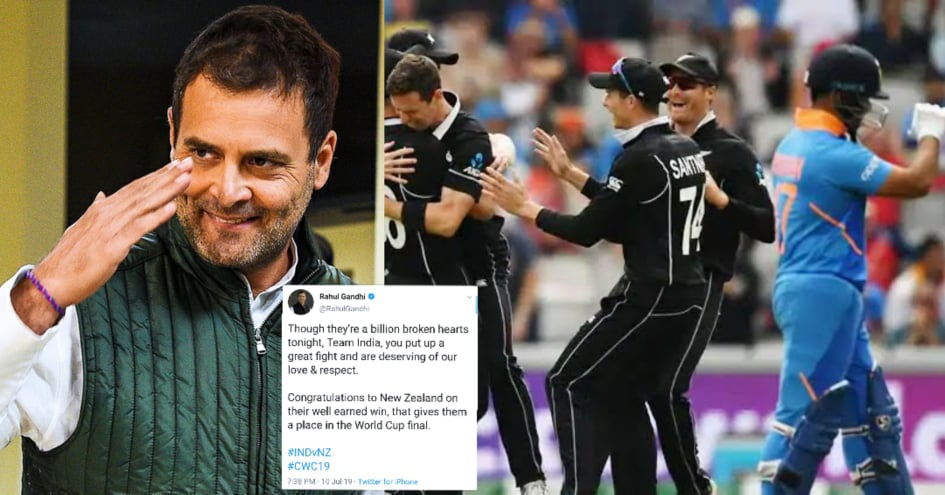 Rahul Gandhi appreciated the great fight that the Indian team put up today. He also said that the Men in Blue deserve the love and respect from everyone. At the same time, Rahul Gandhi also congratulated New Zealand on their victory.

Though they’re a billion broken hearts tonight, Team India, you put up a great fight and are deserving of our love & respect.

Congratulations to New Zealand on their well earned win, that gives them a place in the World Cup final. #INDvNZ #CWC19

The first semi-final between these two teams was not a one day but a two-day affair. Yesterday, the match was washed out due to rains, which meant the remainder of the match was to be played on the reserve day.

New Zealand had a fabulous start with the ball, reducing India to 24 for 4 at the end of 10 overs. But India did put up a fight and was found just 11 runs short of the target of 240 runs.

With this loss, India is now out of the World Cup. On the other hand, New Zealand will now be playing their second consecutive World Cup finals. Hosts England will take on Australia in the second semi-final.

If Australia manages to defeat the hosts, it would be a repeat of the 2015 World Cup finals.