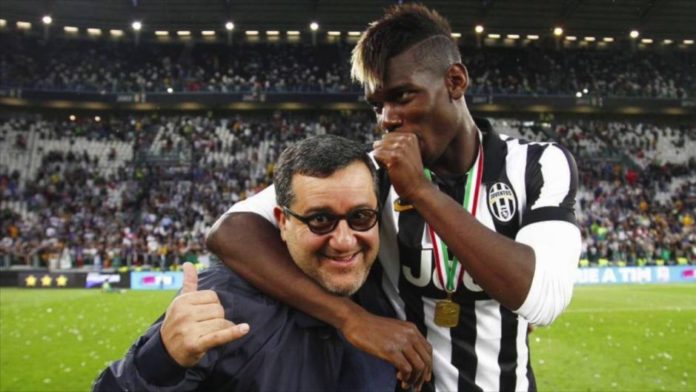 Paul Pogba’s potential exit from Manchester United to Real Madrid might not materialize as FIFA has extended Italian FA’s ban on Mino Raiola worldwide. In case you don’t know, the Italian FA had handed Raiola a three-month ban and his cousin two-month ban effective from Thursday.

In 2016, Raiola violated UK and FIFA regulations which fetched him 41 million euros as commission while brokering Paul Pogba’s move from Juventus back to Manchester United.

Then, Paul Pogba’s transfer fee was the costliest. Neymar Jr.’s move from Barcelona to PSG and Christiano Ronaldo’s transfer from Real Madrid to Juventus overtook it eventually.

‘The Chairman of the FIFA Disciplinary Committee has today decided to extend the sanctions imposed by the Italian Football Association (FIGC) on the intermediaries Carmine and Vincenzo Raiola to have worldwide effect, read FIFA’s statement.

Raiola’s transfer ban will not only affect Pogba’s movement in the summer transfer window but also a lot of players across Europe as he also manages them. Some of them include Manchester United goalkeeper Sergio Romero, Arsenal’s Henrikh Mkhitaryan, Marseille’s Mario Balotelli, and LA Galaxy’s Zlatan Ibrahimovic.

Matthijs de Ligt, the Ajax defender who is set to move to Barcelona in summer, is also Raiola’s client. The ban also casts a shadow on the Dutch’s high-profile transfer.

Guardiola lucky to still have his job – Maurizio Sarri

English Premier League to resume on June 17th with Arsenal vs...