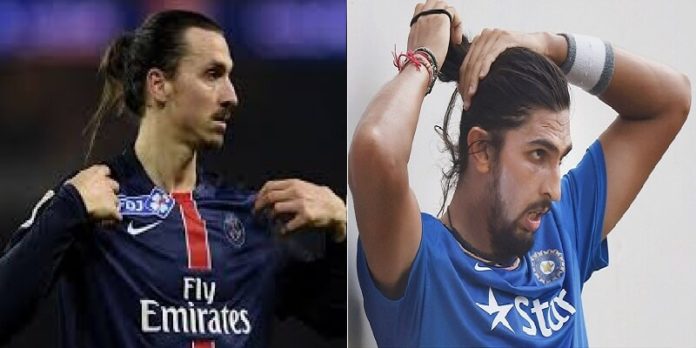 Ishant Sharma or Zlatan Ibrahimovic? On Friday, Indian opener Rohit Sharma shared a throwback photo on Instagram in which he is seen having a light moment with Ishant Sharma and Ravindra Jadeja. The photo was taken when the lanky Indian pacer kept a ponytail and it seems that his hairstyle reminded Rohit of the legendary Swedish striker Zlatan Ibrahimovic, who keeps a similar hairdo.

“We got zlatan amongst us. Great fun chatting,” Rohit Sharma captioned the throwback photo.

We got zlatan amongst us. Great fun chatting 😁

India’s new test opener is enjoying his time both on and off the field after his fantastic performance against South Africa in the recently concluded Test series. The Mumbai batsman has been named as India’s captain for the upcoming T20I series against Bangladesh as Virat Kohli has been granted a break from cricket.

India, meanwhile, started their training amidst the terrible air pollution in the nation’s capital. The high pollution level in the Delhi-NCR region entered the “severe plus” category later on Thursday evening and according to the System of Air Quality and Weather Forecasting and Research (SAFAR), the overall air quality deteriorated to 425 this morning; much worse than normal level.

Earlier this week, some reports speculated that the 1st fixture of the T20I series against Bangladesh will be shifted out of Delhi, but BCCI president Sourav Ganugly denied those reports and confirmed that India will play the match as scheduled.