The cricket fans of India have gone the most bizarre of ways to show their love and support for the team. From body paints to mimicking the appearance of their favourite superstars, the supporters never fail to amuse. Such is the case of one fan who was present at the first match of the ongoing One Day International Series between India and Australia. Meet Chirag Khilare, who had the face of irat Kohli behind his head as a haircut!

Back in December, Chirag Khilare posted a photo on his Twitter handle, where he was seen donning the tricolour during the West Indies series, and the back of his head was trimmed and shaved to Virat Kohli’s face, the cricketer that he idolises. He captioned the picture with: “The best @imVkohli From heart to head.” Check it out below-

Before the start of Tuesday’s match at the Wankhede stadium, Chirag spoke to ANI about his appraisal of the Men in Blues’ skipper.

“For many years now, I have been following Virat in every match in India and have been a fan of him since he became the captain of the Under-19 team,” he told reporters.

Wearing his icon’s face behind his head that took around almost eight hours to complete, Chirag said that he dreams of meeting Virat Kohli in person.

“My dream is to meet Kohli and when I will meet him, I will first touch his feet and hug him and capture that moment through a photograph.” he added.

While Chirag was full on enthusiastic for the first ODI match, India suffered a horrible defeat against Australia. Bowled out on 255 runs in the first innings, the bowlers couldn’t counter the swashbuckling Aussie opening duo of David Warner and the skipper Aaron Finch, who won the match without losing a single wicket.

“We were totally outplayed in all departments,” Kohli spoke in the post match interview.

“It’s a strong Australian team, if you don’t play well, they could hurt you. We saw that with the bat in hand. We didn’t get enough runs.” the 31 year old added.

The second match of the ODI series is tomorrow at the Saurashtra Cricket Association Stadium.

See the lovely message a fan sent Irfan Pathan after his retirement! 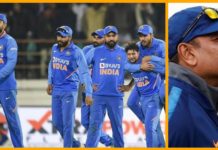