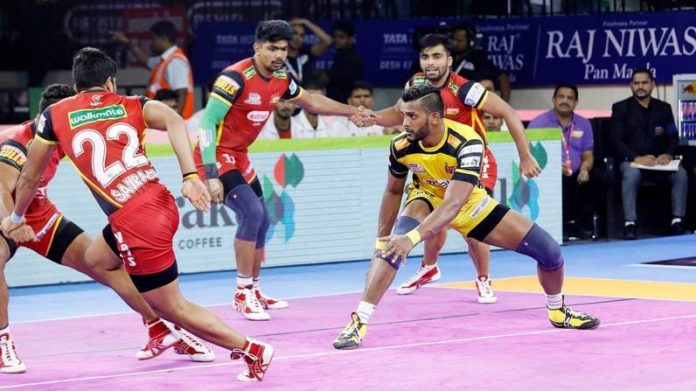 Yet another Pawan Sherawat special and a victory for the defending champions Bengaluru Bulls. A one sided game for the Bulls courtesy raid points from star raider Pawan Sherawat and the experienced captain Rohit Kumar . Siddharth Desai and Titans star defender Vishal Bharadwaj showed promise but they weren’t complemented well by the other players which helped the Bengaluru Bulls win an one-sided game at the Patliputra Sports Complex in Patna. 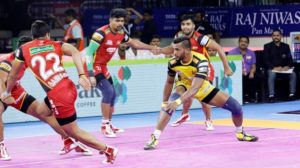 The Telugu Titans who were looking for their first win in the tournament went down to the defending champions Bengaluru Bulls by a margin of 21-points. A super 10 by the star raiders Pawan Sherawat and Siddharth Desai was the moment of the game but Desai’s heroics wasn’t enough for the Titans to win the games Pawan Sherawant was very well complemented by captain Rohit Kumar who scored 8 raid points and star Defender Mahendra Kumar who scored 7 tackle points from 9 attempts. The Titans star defender Vishal Bharadwaj showed class and application as he scored 6 tackle points in 6 attempts with a 100% strike-rate.

Tomorrow will be the last day of the Patna leg of Pro Kabaddi Season 7 as the caravan will continue in Ahmedabad at EKA arena by Transstadia.