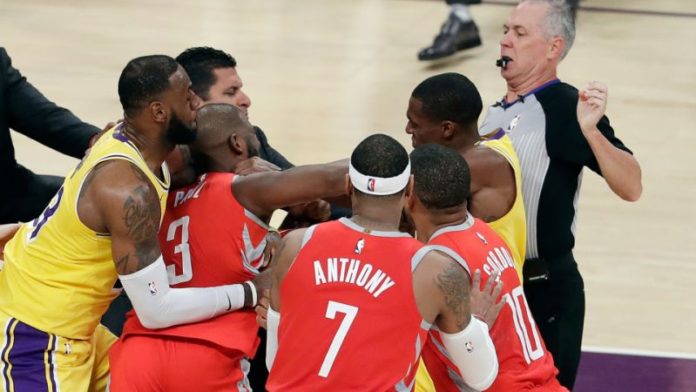 The Houston Rockets played the Lakers in Los Angeles but the highlight from the game was unrelated to basketball. Houston won the game 124-115, but the major attention was caught by a brawl late in the game. 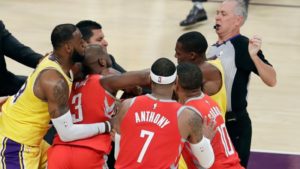 The Rockets were leading 109-108 in the fourth quarter when it all kicked off. Brandon Ingram fouled James Harder, and he then pushed the current MVP around. He was clearly unhappy with the decision, and the forward confronted referee Jason Phillips after getting called for a technical foul.

Soon after, Chris Paul and Rajon Rondo got into a fight, quite literally. Paul put a finger into Rondo’s face which infuriated the Lakers guard. Both of them exchanged punches, and Rondo especially caught Paul’s face with his left hand. Paul later claimed that the fight began because Rondo spits on him.

Paul’s teammate Carmelo Anthony said, “We all know what happened. Ain’t no need to keep going back and forth about that. What happened was unacceptable. It shouldn’t have happened.” Rondo’s teammates claimed that they did not know the reason for the altercation with Paul.

The NBA banned Ingram for four games, Rondo for three games, and Paul for two matches – all without pay, obviously. It’s a shame that it took the light off a great game in which Harden and LeBron James both starred for their teams.