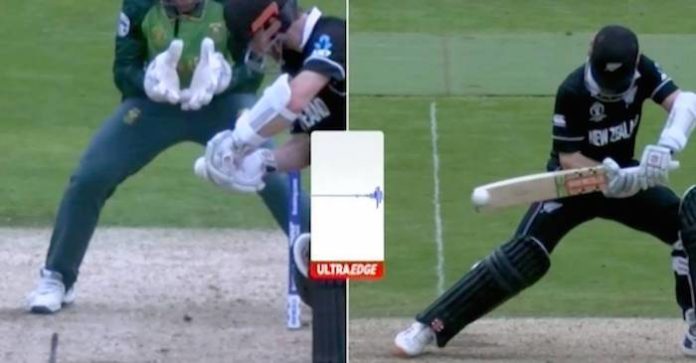 In an incident in yesterday’s match between South Africa and New Zealand, Kane Williamson was batting on 76 when he edged the ball. However, the edge was so slight that the umpire could not catch it and hence did not raise his finger. Not only the umpire but the South African keeper, Quinton de Kock too could not catch the edge.

This was on the last ball of the 38th over. However, the replays showed a spike on the ultra edge. South Africa had a review, but they did not use it there. This proved to be one of the major turning points of the game, as New Zealand ended up winning the match.

This led to former South Africa spinner Paul Adams to question the ethics of the New Zealand skipper. He tweeted a picture of Williamson edging the ball and said, “Why didn’t Kane Williamson walk?? #CWC19 #SAvsNZ.”

He did not stop here. He further went on to ask if Williamson would be upset if he was Mankaded after he did not walk.

If Kane Williamson was Mankad after he didn’t walk. Would he be upset 👀

Tahir’s overs before this incident were also very eventful. Prior to this, David Miller had missed a couple of tough catches, one each of Williamson and Colin De Grandhomme.

When asked about why they did not go for a review, the South African captain Faf du Plessis replied, “We weren’t aware of it. I think I was at long on at the time, and Quinny is the closest to the action. He’s always my go-to man.”

“I just thought it was a plain miss. I just heard about it now at the post-match that he said he had a nick on it. But even Kane said he didn’t know he had to fine tune it. He would have referred it. But that’s not where the game was won and lost,” Du Plessis added.

Post this loss against New Zealand, the World Cup for South Africa is almost over. They just have one win in 6 games. It would be very difficult for them to qualify even after winning all three remaining fixtures.