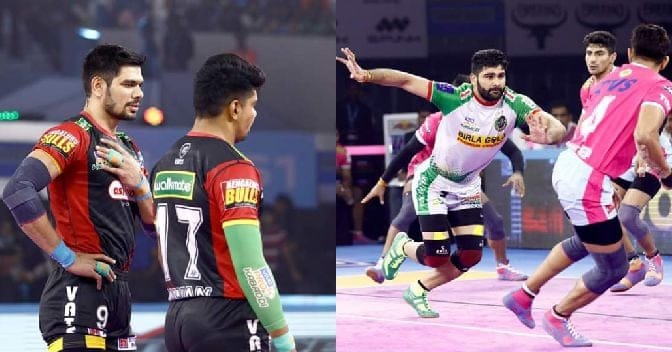 Patna Pirates won yet another game to keep their hopes alive of qualifying for the playoffs after defeating the Jaipur Pink Panthers by 3 points in a game which could prove to be very vital in order to decide the top 6 teams which will qualify for the playoffs. On the other hand, Bengal Warriors kept their winning momentum going after defeating the Bengaluru Bulls in a high scoring encounter at the Netaji Subhash Chandra Bose Indoor Stadium in Kolkata. It was yet another defensive masterclass by the Iranian defender Mohammed Nabibaksh. 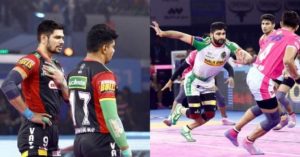 Yet another Pardeep Narwal special as the star raider scored 14 raid points which included a super raid which helped the Pirates to win two games in a row and keep their hopes alive to qualify for the playoffs. The silver lining for Pirates was Jang Kun Lee returning back to form as the Korean raider scored 8 raid points which proved to be vital as defender Neeraj scored his first high-five to help the team win a crunch game against Jaipur Pink Panthers.

A game which went down to the wire as the winner of the game was decided at the last raid of the game. It was yet another defensive masterclass by Mohammed Nabibaksh as the Iranian defender scored 6 tackle points and put pressure back on the Bulls raider. Star bulls raider Pawan Sherawat completed 200 points in this season as he became the first player in the season to do so.

The Next leg of Pro Kabaddi League will be played in Pune at the Shivaji Indoor Stadium where hosts Puneri Paltans will face Gujarat Fortunegiants and Tamil Thalaivas will face Haryana Steelers.