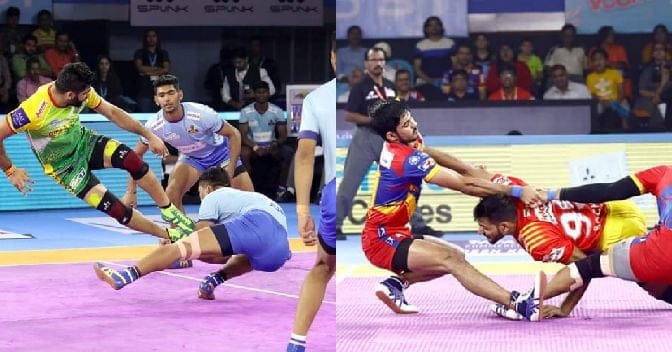 A Pardeep Narwal special helped the Patna Pirates get back to winning ways after losing six consecutive games after their last win against the UP Yoddhas at home. During this Raid riot by Patna Pirates, star raider Pardeep Narwal became the first player in the history of Pro Kabaddi League to reach 1000 raid points. Pardeep finished the game with 26 raid points out of the 28 raid points which Patna scored. In the other game at the Netaji Shubhash Chandra Bose Indoor Stadium in Kolkata it was the UP Yoddhas who defeated the resurgent Gujarat Fortunegiants courtesy an all-round performance by the defensive and offensive trio of the the Yoddhas. 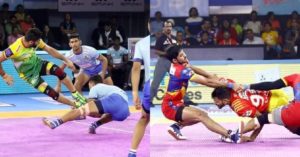 An all-round performance by the UP Yoddhas helped them seal the deal deal and march on to the 5th spot in the points table to consolidate their position in the top 6. It was the defensive trio which proved to be the difference between the two teams as Ashu Singh, Nitesh Kumar and Sumit collectively scored 11 tackle out off the 12 tackle points which Yoddhas scored. For the Gujarat Fortunegiants it was Sachin and Captain Sunil who did the bulk of the scoring.

A game which will be remembered for the heroics of Pardeep Narwal and him completing 1000 raids in PKL history making him the first player ever to do so. It was a complete show bu the pirates to defeat the Tamil Thalaivas as only Ajith Kuar could spin some magic as the thalaivas raider scored a super 10.