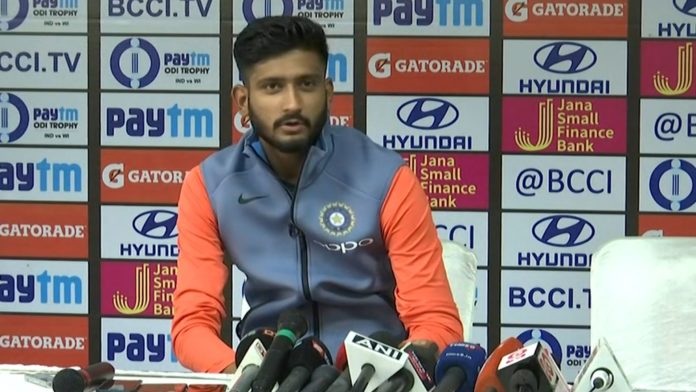 As Barsapara Cricket Stadium prepares for India’s showdown with West Indies, just two ODIs old left-arm pacer Khaleel Ahmed addressed the media on Friday. “It’s a good preparation for me for the World Cup. I want to take as many wickets as I can in the ODIs leading up to the World Cup. It will also boost my confidence and I will be under less pressure, if I am picked for the World Cup,” Khaleel said ahead of India’s first ODI against West Indies on Sunday.

Khaleel also acknowledged Indian bowling great Zaheer Khan who mentored him during his time at Delhi Daredevils. “I think I became a better bowler with his (Zaheer’s) advice,” the 20-year-old from Rajasthan’s Tonk said.

“I have spent a lot of time with Zaheer bhai during my two-year stint at the Delhi Daredevils. We played in different conditions during IPL and he always kept discussing on how to bowl on different surfaces,” he added.

Khaleel recalled how anxious he was before his debut, “I was very nervous (for my debut) as my first tournament happened to be a big tournament like the Asia Cup. There was pressure. But after doing well on debut, I felt I could go further.” Khaleel recorded career best figures of 3 for 48 against Hong Kong on his debut. He was then left out for the tie against Pakistan and Bangladesh before returning against Afghanistan, taking 1/45.

“I never have a feel that I’m a junior in the side. Seniors support me well. Everyone keeps talking to me and boost my confidence,” he said while talking about the positive environment and good companionship in the side.

With age on his side, Khaleel is one for the future, which is why he got the call-up in the first place ahead of the likes of Jaydev Unadkat and Barinder Sran. Albeit it looks difficult at the moment for him to make it to the World Cup squad, but if he manages to put some striking performances in the upcoming series against the West Indies, he might be able to bend the mind of the selectors in his favour given the variety he brings into the side with his left-arm and the angle that it creates against right handers.

Cricket: Zaheer Khan suggests to raise the standards of the Yo-Yo...

If Rohit can emulate his performance in Test Cricket, it would...