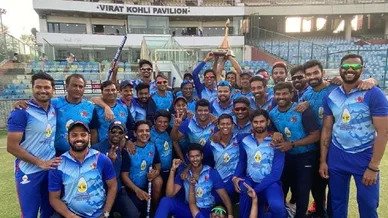 Oman is set to host their first ICC event as this year’s World T20 will be held in UAE and Oman. But ahead of the World Cup, Oman has invited the Mumbai team to play five or six Twenty20 games. This tour will provide some match practice for the Oman national team which will be participating in the T20 WC in October-November.

The arrangement is an initiative of Pankaj Khimji, the head of Oman Cricket (OC). The invitation is understood to have been sent by Duleep Mendis, the Chief Executive Officer (CEO) of OC, to Sanjay Naik, the secretary of the Mumbai Cricket Association (MCA).

According to reports, the Mumbai Cricket Association has accepted the invite. A source told Cricbuzz “Yes Mumbai team will be traveling and the details are being worked out,” confirming the tour.

The Mumbai team set to leave for Oman on 19 August

The team is set to leave for Muscat on August 19. The arrangement is seen as a win-win for both parties. The home team will get some quality practice ahead of the T20 WC and the Mumbai side will get to play with a national team before the start of the Indian domestic season. Oman has qualified for T20 WC and will also be hosting six first-round games of the ICC event.

Mumbai are a big ticket team in the domestic circuit. They have produced numerous players over the years. They have the record for winning the most number of Ranji Trophy titles in history. Mumbai had won the Vijay Hazare one-day Tournament under Prithvi Shaw last year.

But this time, they will have to play without some big names. Prithvi Shaw, Shardul Thakur and Surya Kumar Yadav are currently in England for the test series. Whereas Shreyas Iyer is recovering from a shoulder injury. Hence, the MCA will have to look for a new captain. This would be a great opportunity for some young players of Mumbai to leave a mark by giving noteworthy performances against a national side.

MCA officials, who have also confirmed the tour, have said that the Mumbai team will be finalised after the selectors consult the coach, Amol Muzumdar. Mumbai selector Gulam Parkar, a former India player, had worked in Oman for a long time before returning to Mumbai recently.