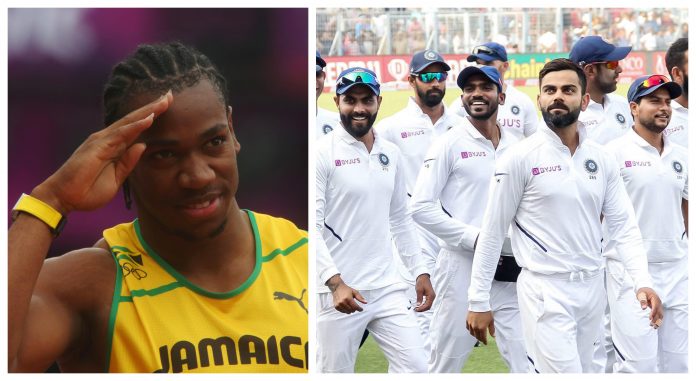 Team India have started their journey at home with a loss to England in the first Test of the four-match series. Although the host lost, the popularity of the Indian captain Virat Kohli isn’t unfamiliar. He has made a niche for himself with his sheer brilliance and despite their defeat, Olympics medal winner Yohan Blake has praised and shared his admiration towards the Indian cricket team as well as the captain.

The Jamaican sprinter, Blake won gold at the 100 m at the 2011 World Championships and became the youngest 100m world champion ever. He has revealed how Virat Kohli and his captaincy has impressed him. However, his comment came after England beat India by 227 runs in the first Test in Chennai and take an unassailable 1-0 lead in the series as well, but the way Kohli led from the front and took all the responsibility has impressed Blake.

“What I really love about Team India is that Virat Kohli doesn’t find any excuses. That’s what I really love about his captaincy, he took the blame for everything. He said the bowlers didn’t find the right areas, the batsmen were not as consistent. He said ‘we got to go back to the drawing board and come back’. And that’s what I love about Virat Kohli and his captaincy,” Blake said in a video shared on his Instagram.

Blake also admitted that he was impressed with Team India youngsters Shubman Gill and Rishabh Pant. While Pant scored a crucial 91 in the first innings, Gill scored a fifty in the second innings of the First Test. He also applauded Cheteshwar Pujara for his stable knock and fight against a mighty Aussie attack in the Test series last month.

Notably, Shubman Gill impressed with his batting skill and calm demeanour in his debut Test series in Australia. Even Pant too have stood up and taken the team home as well and helped India retain the all-important Border-Gavaskar Trophy.

“And also, what stood out for me was Shubman Gill, he’s a wonderful batsman. Of course, Rishabh Pant is excellent. Not every time he’s going to put on a show but he’s excellent for the game of Test cricket. That’s why I love Test cricket, it mentally tests you. (Cheteshwar) Pujara in Australia showed that wonderful fight and that’s what I love to see. Test cricket is absolutely the best. Second Test should be interesting, India was 1-0 down in Australia, they are 1-0 down at their home ground now. The second Test, I’m looking forward to it,” Blake concluded.