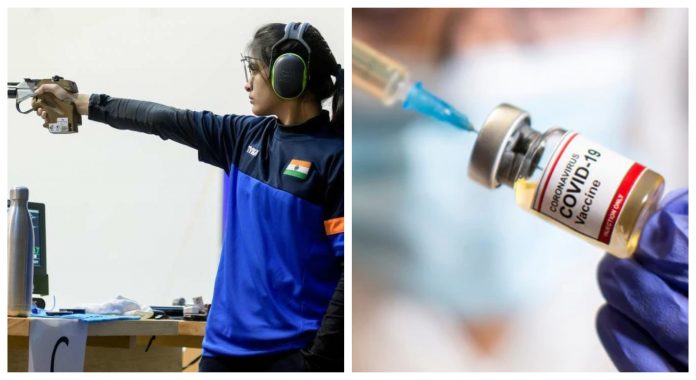 The Indian shooting team which will head for the Tokyo Olympics later this year, will receive vaccines before their flight to Croatia to take part in the upcoming European Championship.

The Indian shooters are scheduled for a chartered flight to Zagreb on 11th May to prepare for their participation in the championship which will be hosted from 20th May to June 6th. Following the tournament, the contingent will remain in Zagreb for Olympics preparations and will leave for Japan directly from there.

The news of the mandatory vaccination was announced by the National Rifle Association of India (NRAI) on Monday, which announced that alongside the athletes, the coaches and other officials will also receive the vaccine on 6th May.

“All the arrangements have been made in association with the Croatian Shooting Federation,” NRAI commented in a press release, “the NRAI has also made arrangements for a chartered flight for the entire squad to fly to Zagreb, in order to nullify the threat of contracting infection to the maximum.”

The Indian team heading for Zagreb and subsequently for Tokyo, consists of 13 rifle and pistol shooters alongside nine coaches, all of whom are scheduled for vaccination this Thursday.

“It was also announced that all members of the squad including coaches and officials, would be vaccinated by May 6, 2021, before their departure,” the release from the governing body of the sport in the country further asserted, “the NRAI has also accommodated the private coaches and support staff of the Shooters in the arrangement.”

Deepali Deshpande, Manoj Kumar, Suma Shirur, and Ved Prakash Pilaniya will be joined by two foreign coaches- Oleg Mikhailov and Pavel Smirnov. On the other hand, Samaresh Jung, Jaspal Rana and Ronak Pandit decided to pull out from the coaching group earlier.

Alongside the athletes and coaches, the Indian contingent will have four physiotherapists with them- Sumit Arora, Zeinia Samar, Sumita Jain and Shloka Varvatkar, as well as two physical trainers Akshay Bhapkar and Har Kaur.