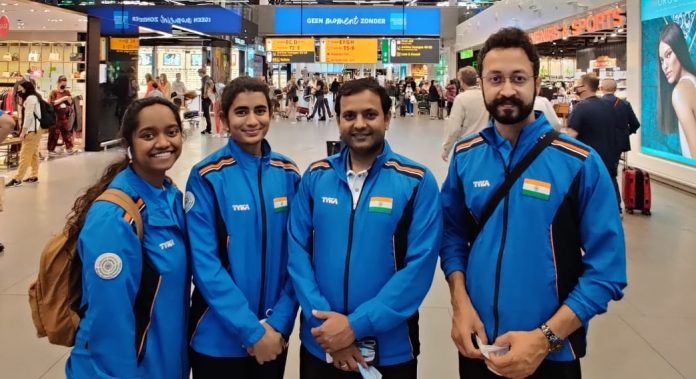 The Indian shooting contingent, which was stationed in Croatia for their participation in the recently concluded European Championship as well as ISSF World Cup, have reached Amsterdam from Zagreb to board their connecting flight to Tokyo for the Olympics.

The fifteen Indian shooters had reached Croatia back in May, first for the European Championship which had taken place from 20th May 20 to 6th June in the city of Osijek, followed by the World Cup that was scheduled from 22nd June to 3rd July.

Due to the travel restrictions, the contingent was slated to fly to the Japanese capital directly from Croatia instead of returning to India and on Friday afternoon, they touched down in Amsterdam and will board their flight to Tokyo later in the night.

They are expected to land in Tokyo in the early hours of Saturday, with a week prior to the start of the shooting competitions scheduled for 24th July.

The Indian shooting team has departed from their Zagreb base & reached Amsterdam. They will leave later tonight for @Tokyo2020

The shooting team had seen a massive medal tally at the previous edition of the ISSF World Cup which was hosted in New Delhi, compared to the Croatian edition, mainly due to the fact that the Indian capital saw participation from 52 shooters, while only 14 were seen in action in Osijek.

The men’s team, comprising of Aishwary Pratap Singh Tomar, Deepak Kumar and Divyansh Singh Panwar were defeated in the showdown for the bronze medal against the Serbian team, losing to the trio of Milenko Sebic, Milutin Stefanovic and Lazar Kovacevic 14-16 in the third place match.

On the other hand, the women’s counterpart, the triad of Anjum Moudgil, Apurvi Chandela and Elavenil Valarivan finished 11th in the qualification round with a total of 1867.7, failing to make the cut to the next round.