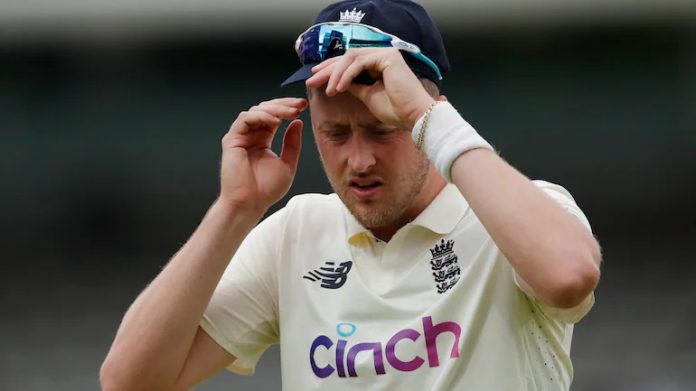 English and Sussex fast bowler Ollie Robinson has been suspended from international cricket immediately. This comes after his tweets from 2012 and 2013 resurfaced that used racist and sexist terms. The 27 year old was the pick of England’s bowlers in the first Test match between New Zealand and England at Lord’s. Picking up seven wickets in the match and scoring crucial 40 runs in the first innings, Robinson was clearly England’s MVP of the match. But due to his disciplinary issues, Robinson will miss the 2nd Test.

England and Wales Cricket Board said in a statement on Sunday “He will not be available for selection for the second Test against New Zealand starting at Edgbaston on Thursday 10 June. Robinson will leave the England camp immediately and return to his county.”

On Wednesday, Robinson read out a statement apologizing for his actions. He said they were sent during a tough period in his life after he’d been fired by English county Yorkshire as a teenager. He claims that he has matured since then and is ashamed of making those remarks.

“On the biggest day of my career so far, I am embarrassed by the racist and sexist tweets that I posted over eight years ago, which have today become public. I want to make it clear that I’m not racist and I’m not sexist. I deeply regret my actions, and I am ashamed of making such remarks, ” said Robinson. England captain Joe Root in his post-match interview said more had to be done to educate players “about how to behave in society”. He also said he is unsure whether Robinson will play the next Test match.

“We’ve started doing a lot of good work as a team and we’ll continue to do that. We want to make the game as inclusive and diverse as we possibly can. We’ll continue to keep looking at finding ways to make that possible, “ said Root.

Former England captain Naseer Hussain agreed with Root. He said that Robinson had tarnished an otherwise memorable day in his career. But he also acknowledged that the fast bowler had apologized and recognized his mistake.

“But he’s an 18-year-old lad who’s made a mistake, and we’ve all made mistakes. And it’s ruining the biggest day as a professional cricketer.”

Earlier, Former England captain Michael Vaughan gave a suggest that English cricket Board. He said ECB should do a thorough background check on all debutants. This will prevent any future controversy like in the case of Robinson.